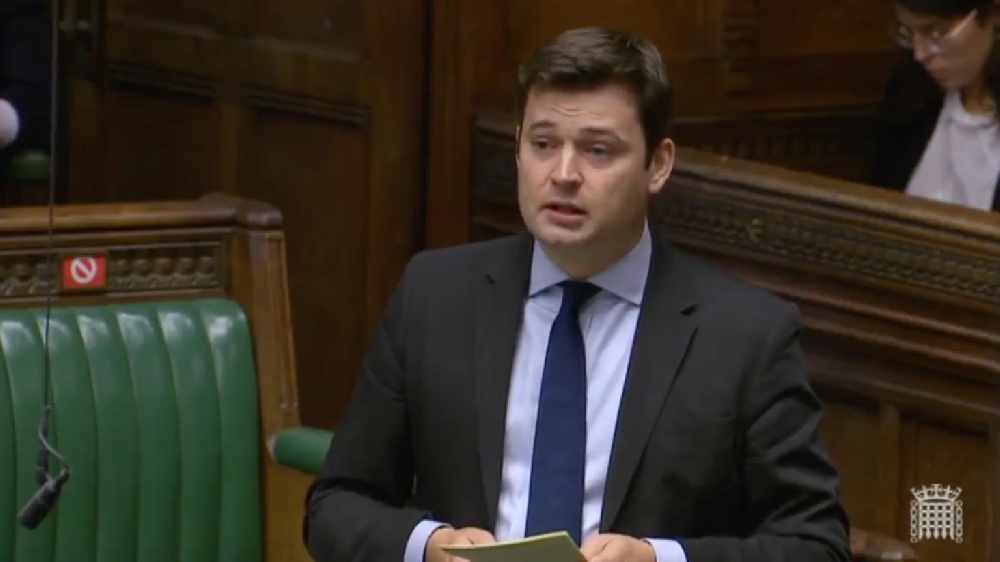 High Peak's MP has been accused of "putting the career ladder above the rule of law" after voting in favour of a proposed law giving the government the power to override parts of the Brexit agreement with the European Union.

The Internal Market Bill passed its first hurdle in the House of Commons on Monday evening, with MPs – including Robert Largan – backing it by 340 votes to 263.

Ministers have said it contains vital safeguards to protect Northern Ireland and the rest of the UK if negotiations on a future trade deal break down, but critics have warned it risks damaging the UK by breaching international law.

After the vote, the "Open Scrutiny of Robert Largan MP" Facebook page - which claims not to be affiliated to a particular political party - said in a post: “Unfortunately Robert Largan wasn’t one of the independent minded and moderate backbench Tory MPs this evening that rebelled against the government’s plan to break international law.

“Despite being condemned by all five living previous Prime Ministers and even prominent Brexiteers, Mr Largan has put the career ladder above the rule of law. It also begs the question – if there were such fundamental flaws to the Withdrawal Agreement, that such drastic measures had to be taken, why on earth did he vote for it in the first place?

“Our integrity and reputation is now questionable and unscrupulous on the international stage, which will likely bring difficulty in negotiating promising trade deals.”

Ending a two-day absence on social media, Mr Largan (pictured) posted a video on his Facebook page on Wednesday evening of him speaking in a debate in the House of Commons about the bill – which is currently receiving detailed scrutiny.

He outlined that he supports “the main aims of the legislation” but also said he had “serious reservations about elements of the bill” and urged the government to “make improvements to the bill before it is passed into law”.

This is every word of the MP's four-minute speech:

“On Monday evening, I voted to give this bill its second reading because I support the broad aims of the legislation. I’m very grateful for the opportunity to speak on the detail of this bill, particularly clause 46. However, I do have reservations about certain aspects of the bill.

“The Internal Market Bill is necessary to safeguard the union and ensure that businesses in all parts of the UK can continue to trade seamlessly across the UK. It’s important that Derbyshire hill farmers can continue to sell lamb to Scotland, that supermarkets in Wales can continue to stock sweets made in New Mills and construction sites across the country can continue to use the high-quality limestone quarried out of the hills around Buxton and Hope.

“The UK’s internal market is centuries old and a cornerstone of our union and our economic success. The bill helps provide certainty to businesses that when we leave the transition period, the internal market will be safe and that our food hygiene and animal welfare standards will be maintained. Clause 46 is a vital part of this bill that will the government the powers to spend money in areas previously administered by the European Union including areas such as infrastructure, economic development, culture and sport, as well as aspects of education, training and international exchanges.

“This is essential to allow the government to properly serve all parts of our United Kingdom. I’ve previously talked in this place [the House of Commons] at length about how successive governments of all parties have failed to properly invest in certain parts of the country – including, of course, in the High Peak over the last few decades. The clauses in front of us are part of remedying those past mistakes. As I’ve said, it’s for these reasons that I absolutely support the core thrust of this bill and voted for it on second reading.

“But I am uncomfortable about an element of the bill and that’s why this committee stage is so important. I firmly believe that we must fully deliver on the 2016 referendum result and we must take a hard-headed approach to negotiations with the EU to secure the best possible long-term trade deal. Brinksmanship and preparing for the worst are of course a key part of that. In my view, it’s also essential that we secure that trade deal and deliver on our promises in a way that’s in line with our values. Any breach of our commitments must only be considered as an absolute last resort and, even then, only after considered debate, scrutiny and oversight.

“So as this bill progresses through the house, I hope that the government listens carefully and takes the opportunity to improve on it. I’m very grateful for the Lord Chancellor, the Attorney General, No.10’s trade negotiating team and the minister herself for meeting with me and others to discuss those concerns. I hope that we can make those improvements. We have a tendency in this place [the House of Commons] to spend far too much of our time speculating about what might have been and on events that are outside of our control – perhaps because it is more comforting than confronting the hard choices in front of us. But that’s exactly what we must do – to deliver on our promises and safeguard the future of the United Kingdom.”