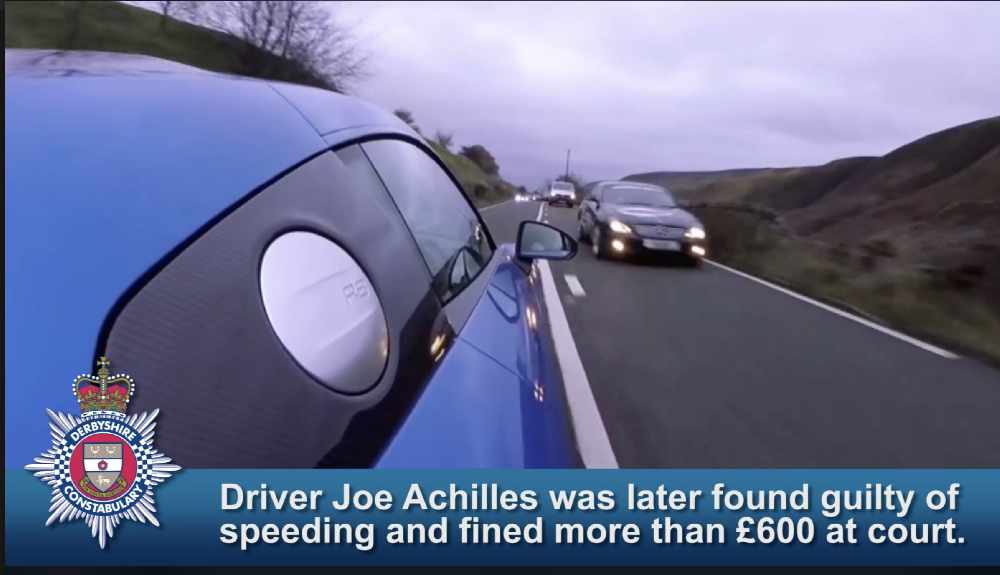 A motoring Youtuber who posted a video of himself driving a sports car at nearly 100mph on the Snake Pass has been given six points on his license and fined more than £600.

Joe Achilles strapped a GoPro camera onto the side of an Audi R8 before speeding along one of the region’s most notoriously dangerous roads.

He then uploaded the video of the high-powered sports car being driven along the A57 Snake Pass to his Facebook account on Saturday 3 November - where it was spotted by officers from Derbyshire Constabulary’s Roads Policing Unit.

The officers, who at the time were investigating an entirely different matter, could see the car was driving at well over the speed limit.

Sergeant Adam Shipley said: “At that point we turned to Road Safety Support.

“RSS provide help in all sorts of road safety matters to forces around the country; however, ours was a very specific request.

“We needed to be able to prove the speed the car was travelling at along what, myself and my team know only too well, is one of our most deadly roads.”

Using state of the art technology, technical support manager for RSS Steve Callaghan, was able to work out exactly how fast the Audi R8 was travelling.

Mr Callaghan said: “I examined the video file and was able to find the location of the incident, starting at the car park of the Snake Pass Inn, driving east towards Sheffield.

“The Facebook video showed road markings and traffic signs that were distinctive, and which were able to be identified in the video as well as the Google Earth Pro application.

With the distances and times established it was possible to calculate a series of average speeds between the landmarks.

Eleven average speeds were calculated as the £100,000 super car was driven towards Sheffield in the face of oncoming traffic. Not one of the eleven speeds was within the 50mph limit. The slowest he was travelling was found to be 58mph – the fastest was 93mph.

Achilles, 40, of Village Road, Denham, Uxbridge, was summonsed to Southern Derbyshire Magistrates’ Court where he was found guilty of speeding.

He was handed a fine of £615, ordered to pay costs of £620 and his licence endorsed with six points.

Sergeant Shipley said: “This type of driving is careless, reckless and selfish.

“On this occasion, thankfully nobody died, but all too often the outcome very different.

“For a man who drives for a profession I am appalled that he seemingly has so little value for the lives of other road users.

"The roads of the UK are not race tracks and should not be used as such.

“Strapping a Go Pro to the side of a car and driving in this manner – all in a bid to get viewers on social media – is quite frankly pathetic.

“I hope this case sends a message to others like Joe Achilles who think they can come to our county and put lives at risk.

“We may not see you at the time but know that we have the capability to ensure that you are brought to justice.”

If you come across a video that you believe shows dangerous driving on a piece of road that you know to be in Derbyshire, pass it on to police by using the Derbyshire Capture website here.