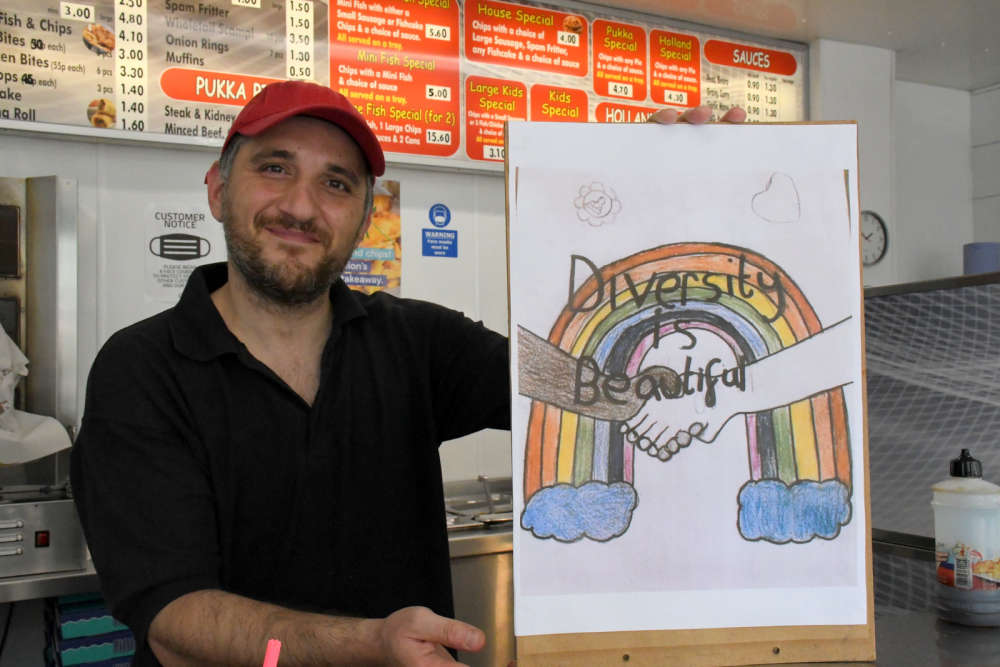 Lev at Billy's Plaice in Hadfield has got behind the 'High Peak welcomes diversity' campaign.

The "unforgivable" racist abuse aimed at England footballers after the Euro 2020 final shows why campaigns like 'High Peak welcomes diversity' are needed, the secretary of High Peak Stand Up to Racism has said.

Marcus Rashford, Jadon Sancho and Bukayo Saka were subjected to abuse online immediately after missing penalties in the shootout at Wembley on Sunday evening (11 July) as England lost to Italy.

Linda Walker, of High Peak Stand Up to Racism, said: "We have seen not just the vile messages on social media, but the defacing of a mural to Marcus Rashford in Manchester.

"This young man has done so much to improve the lives of children living in poverty as well as being a brilliant young footballer, and he has earned admiration and respect from all of us."

The group launched a campaign last month and have sought support from local businesses throughout the borough to pledge their commitment to welcoming diversity and inclusion.

Since then, dozens of shops, cafes, pubs and restaurants in Glossop, Hadfield, Hayfield, New Mills and Chapel-en-le-Frith have now put a sticker in their window and a statement inside to say that they support diversity and inclusion in the High Peak.

Lev, the manager at Billy's Plaice fish and chip shop in Hadfield, is an enthusiastic supporter of the campaign.

He said: "My fiancé and I love this community and feel very fortunate to be living and working in the High Peak area. Anything we can do to help and support any helpful campaigns is a privilege. I'm also a believer in diversity and equality, as we have multiple races and nationalities in our family. Everyone is equal."

Steve Roberts, the manager of George Street Community Bookshop in Glossop, said: "We welcome the diversity campaign as only through celebrating our differences can we come together as a community."

Meanwhile, High Peak Stand Up to Racism will take the knee on Glossop High Street at 11am on Saturday morning (17 July). They urge readers to join them in supporting black England players and all those who suffer racist abuse and discrimination.

Anyone who would like to know more about Stand Up to Racism or the High Peak Welcomes Diversity Campaign can email highpeakstanduptoracism@gmail.com or look for the group on Facebook.