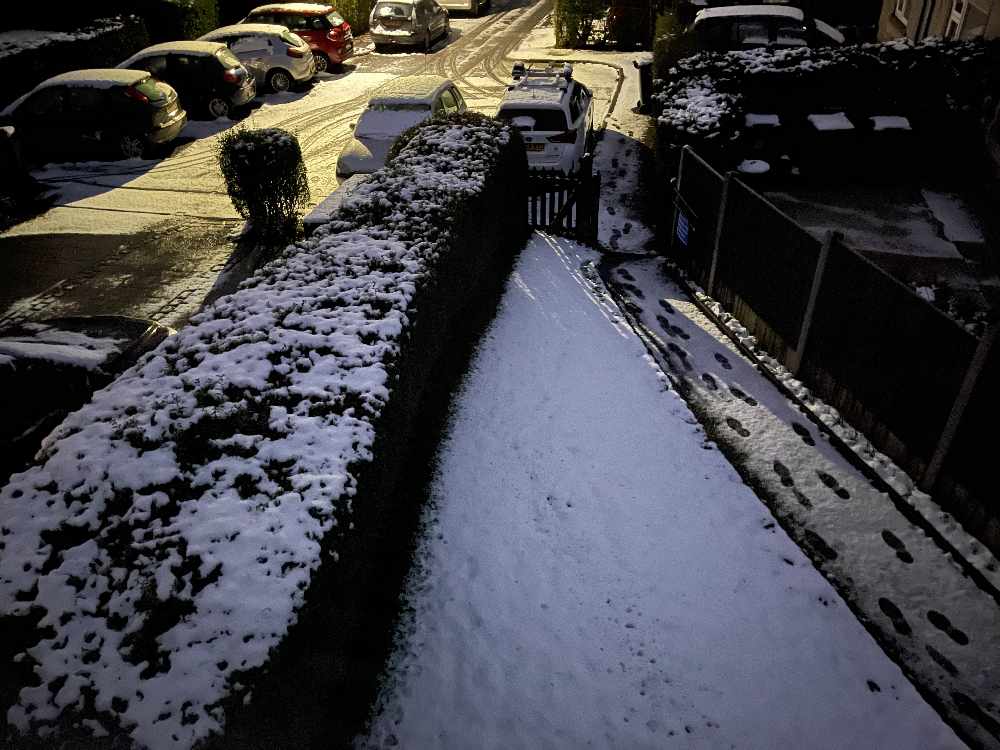 Follow the latest developments on Thursday (21 January) as snow and ice hit the region after heavy rainfall from Storm Christoph.

Greater Manchester Police say it will continue to work with other agencies as the severe weather caused by Storm Christoph is still having an affect on residents across the region.

As heavy rain and snow fell, water levels in the Irwell, Mersey, and Goyt rose to unprecedented levels and GMP worked in conjunction with partners from local authority's, GMFRS, NWAS, the Met Office and the Environment Agency to ensure that residents in areas particularly affected were prepared to take the necessary safety measures.

GMP's Assistant Chief Constable Nick Bailey led a strategic co-ordination group of local partners and emergency responders from Greater Manchester, and a major incident was declared on Tuesday evening to "ensure maximum resources could be utilised to prevent a further threat to the public's safety".

Thankfully, despite the worst of the weather overnight, no injuries have been reported and the majority of river levels have begun to steadily decrease. The major incident response was stood down earlier on Thursday and the severe flood warnings have been removed for the River Mersey, East and West Didsbury and Northenden.

Weather warnings remain in place in some areas and resources have not been withdrawn from the multi-agency response at this time.

Assistant Chief Constable Nick Bailey, Chair of the GM Strategic Co-ordination Group for Storm Christoph, said: "This week has posed some significant challenges to all of Greater Manchester - agencies and the general public alike - and I would like to thank everyone involved for their co-operation and perseverance over the last few days to mitigate the threat posed by Storm Christoph.

"Incidents like this are never easy, but this year COVID-19 added another complex dimension to our multi-agency response to this torrential weather and I am impressed and encouraged by how efficiently all those involved operated to ensure the safety of the public.

"While this is no longer a major incident, I want to be clear that this does not mean that we are withdrawing resources from the areas affected and others identified as potentially vulnerable.

"Residents will continue to see an increased presence from emergency services, local authorities and other partnership agencies as we support those still facing challenges caused by the flooding and we hope we can safely return people to their homes as quickly as possible.

A number of drivers have disregarded road closed signs and advice from local authorities on Stannybrook Road in the Daisy Nook area, on the border of Tameside and Oldham, by ploughing through deep floodwater in their vehicles in order to pass through the route today, following heavy rainfall from Storm Christoph on Wednesday. 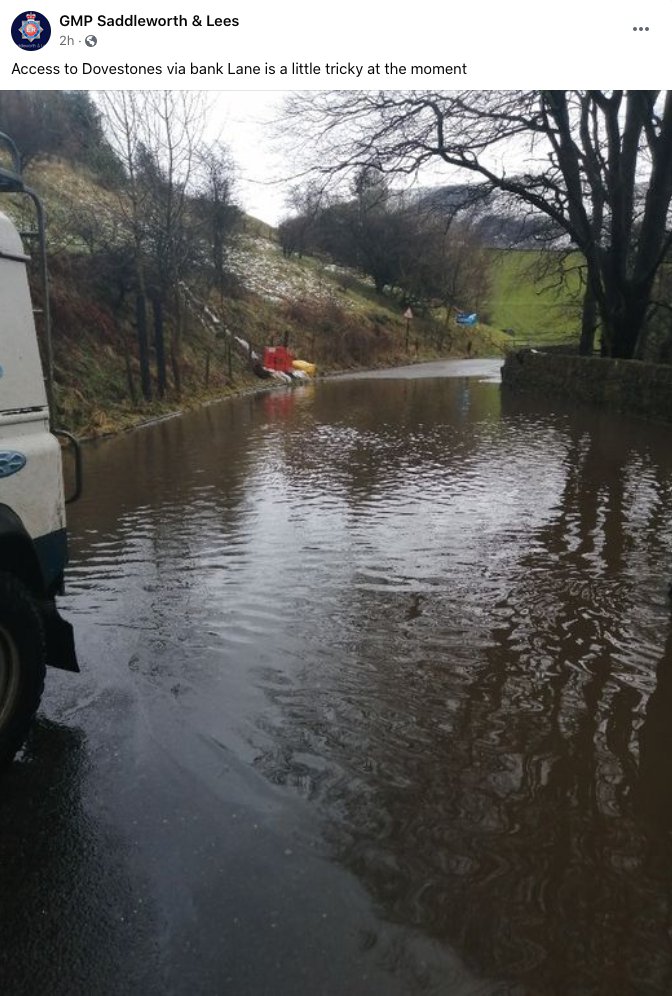 2.30pm - 'Check before you travel' plea from Northern

Rail operator Northern is asking all passengers to check ahead before travelling as the region continues to feel the impact of flooding.

Last night (Wednesday), part of the North West rail network was closed as high water levels submerged large parts of the railway as well as many roads.

Today (Thursday), while the rail network is running once more, disruption still persists in many areas of the network with services likely to experience delays and cancellations.

Chris Jackson, Regional Director at Northern, said: “The past couple of days have been really difficult and I’m grateful for the patience and understanding our customers have shown so far. I’m going to have to ask everyone to be patient a little longer as we continue to work with colleagues from Network Rail to help the railway recover from the extreme weather and return normal services in all areas. In the meantime I would ask anyone who has to make an essential journey by rail to allow extra time for travel and to check carefully before setting off.”

Routes still experiencing issues in the north of England are as follows:

12.45pm - Gritters to be out again in Derbyshire with temperatures set to drop

After a fairly dry day temperatures are forecast to drop overnight so we will be gritting all primary and secondary routes this afternoon, and then all primary routes again 4am tomorrow. Take care as there is a lot of water on the roads, which could problems. pic.twitter.com/bcSApRQOq9

Assistant Chief Constable Nick Bailey, Chair of the GM Strategic Coordination Group for Storm Christoph, said: "The latest update we have received has suggested that we are past the worst point of potential flooding and therefore we have taken the decision, following consultation with the Environment Agency and Met Office, to step down the major incident that was declared on Tuesday morning.

"The severe flood warning for parts of Didsbury is no longer in place; however I want to be clear that this does not mean that we are withdrawing resources from the areas affected and others identified as potentially vulnerable.

"Residents will continue to see an increased presence from emergency services, local authorities and other partnership agencies as we support those still facing challenges caused by the flooding and a safe return to their homes.

"There remains severe flood warnings in the Little Bollington area of Trafford and we have already been in contact with those residents who may be affected to advise them on potential evacuations and preparations that can be made.

"As a partnership, we will continue to monitor the situation and should there be a need to step up a major incident and resources again then we are prepared to do so. I would urge the public to remain on alert for potential disruption caused by the flooding and only travel where absolutely essential.

"We will continue to keep the public where possible and appropriate on the latest position with regards to this situation. More information for anyone with concerns about flooding in their area can be obtained by contacting your local authority who will be able to sign-post you to the most appropriate information and support.

"I would also link to thank the emergency staff from the fire service and police, who worked alongside colleagues from the Local Authorities and support volunteers,  for their personal commitment to protecting our communities."

10am - What's the weather forecast for today?

It's worth checking to see what the weather is supposed to be like in your area. Check out the Met Office website, where you can search for the latest forecast by typing in your postcode. Visit https://www.metoffice.gov.uk/

Councillor Caitlin Bisknell has shared these snaps of some picturesque views in her part of the High Peak this morning.

9.05am - Whaley Bridge flood warning no longer in place

The flood warning which had been in place for the River Goyt in Whaley Bridge is no longer in force, the Environment Agency has now confirmed. 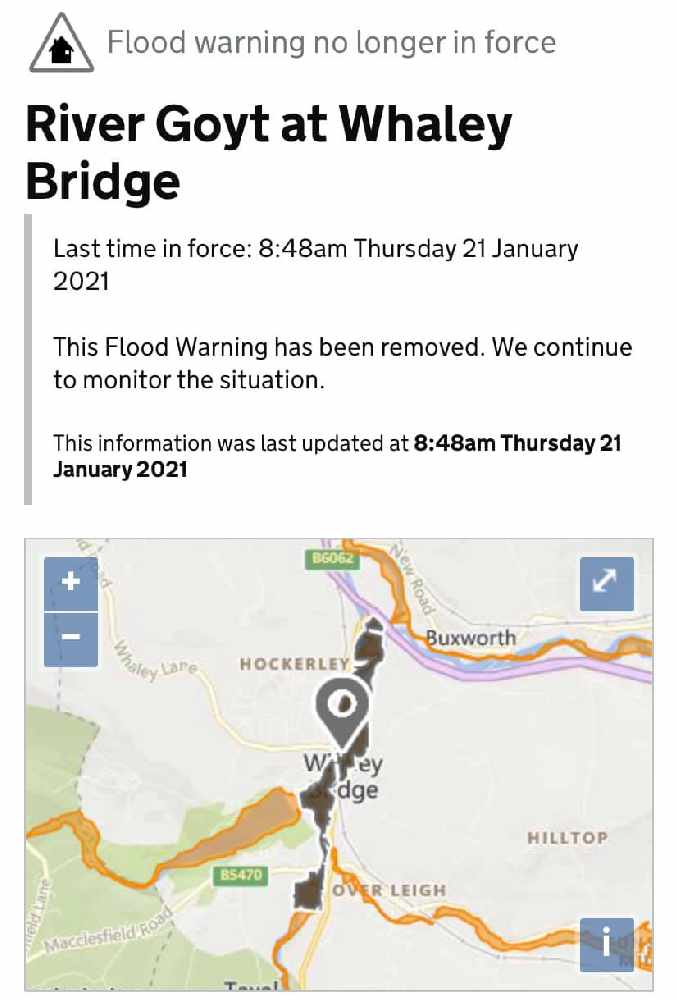 9am - Water levels have lowered in Oldham

In a Facebook post, Oldham Council said: "Water levels are lower in Oldham today. There are still some issues on local roads and we will continue to monitor melting snow. A big thank you to our staff and partners for working tirelessly to make sure Oldham residents are safe." 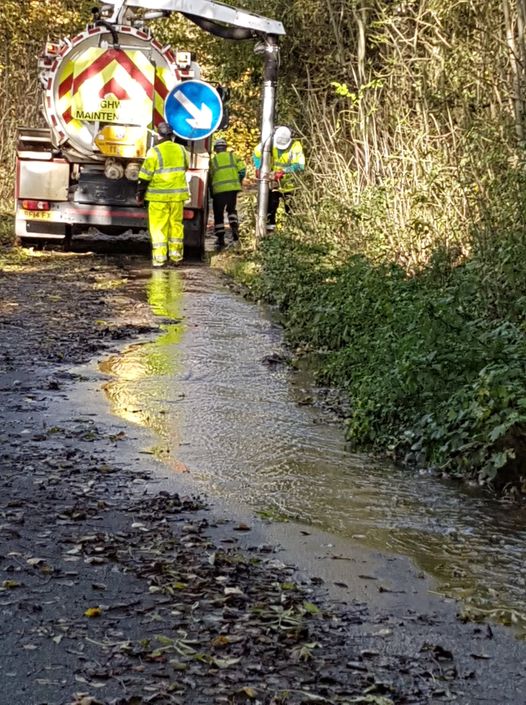 The bridge at Tame Street in Stalybridge has now reopened this morning, as river levels have sufficiently dropped for it to be safe.

Images below courtesy of Tameside Council. 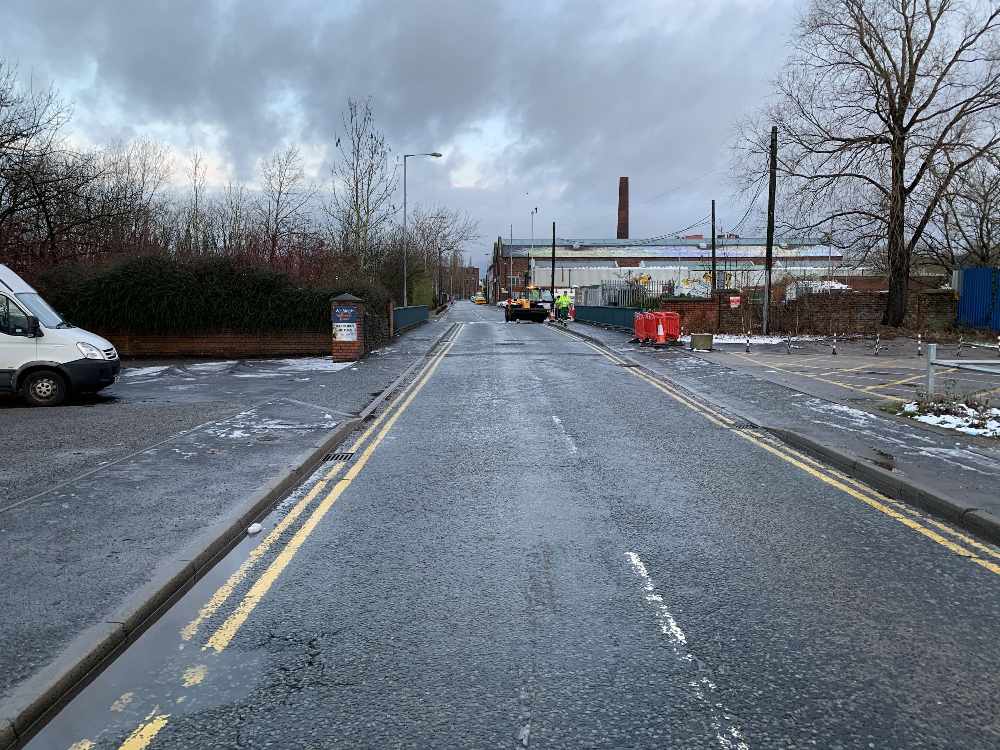 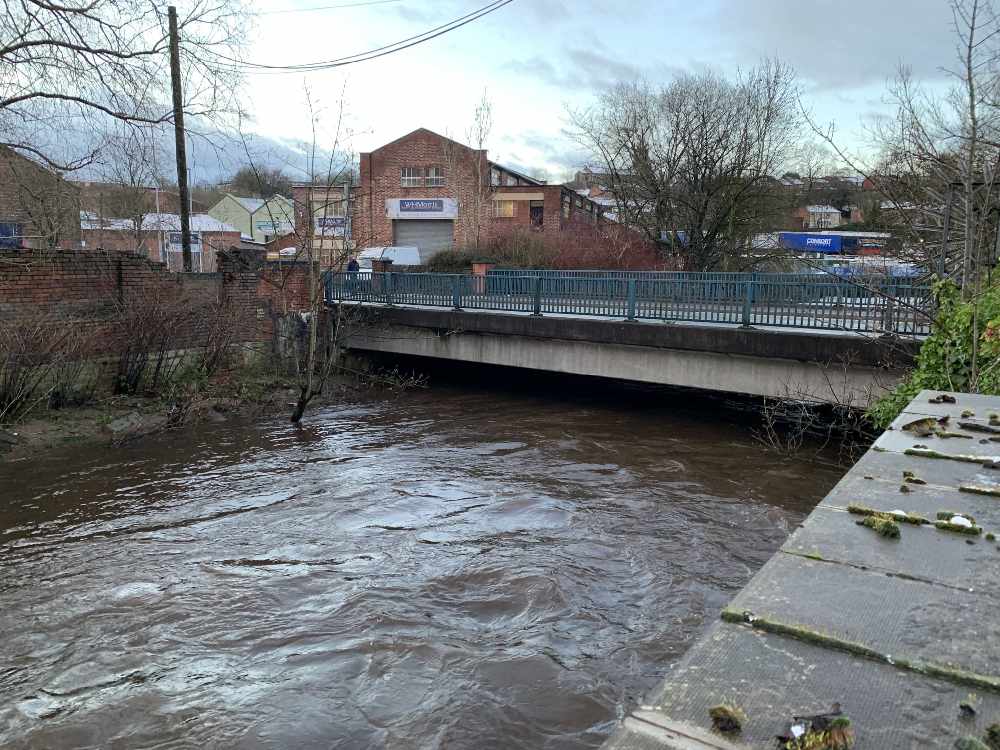 8.45am - Flood warning still in place for River Goyt

A flood warning is still in place for the River Goyt in Whaley Bridge, with the Environment Agency expecting river levels to remain high until tomorrow (Friday).

8.30am - Flood alert in place for River Mersey Uplands catchment

River levels are expected to remain high in the River Mersey Uplands catchment including Hyde, Ashton-under-Lyne, Denton, Stalybridge and Glossop until tomorrow (Friday). 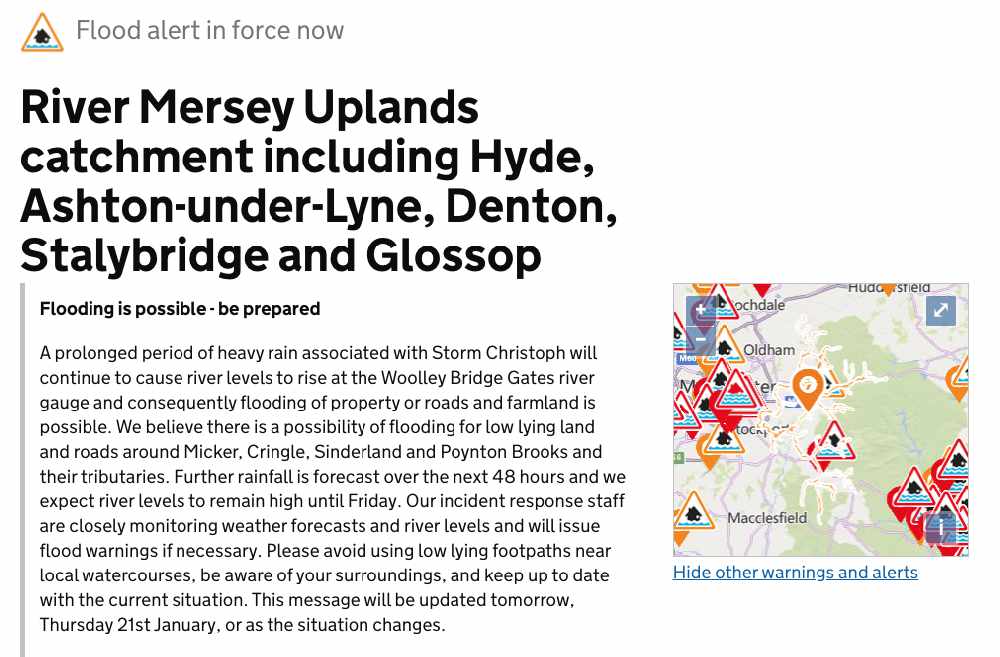 This was taken at around 10pm last night (Wednesday) by Joanna Jack from her window in Gorton, just outside Tameside. 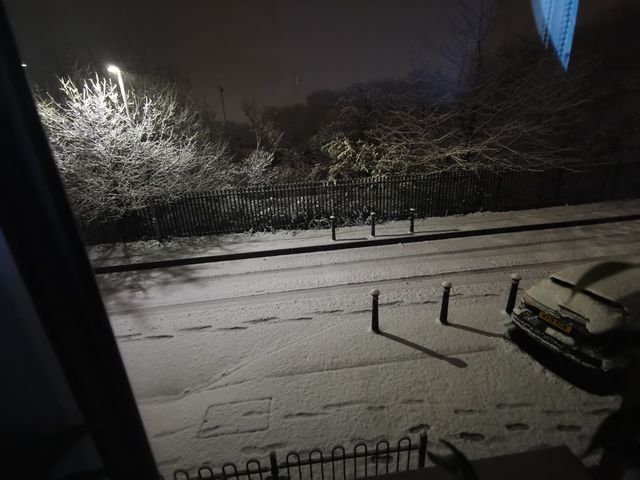 8am - Another Derbyshire road closure 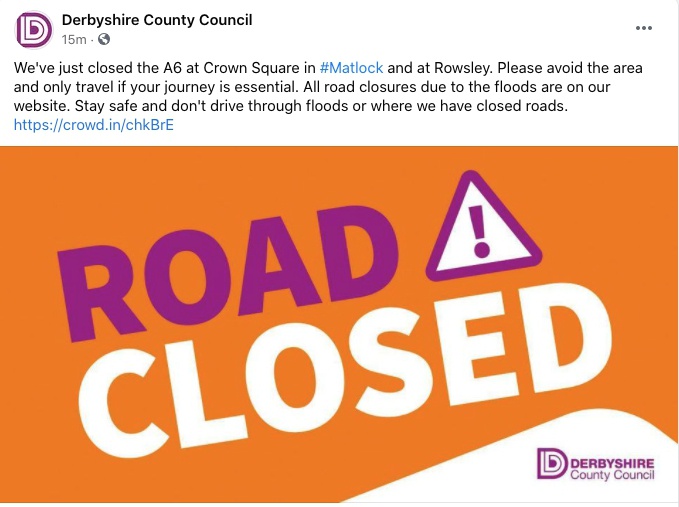 Thanks to Linda Bulman for sharing this picture of a snowman which appeared in her back garden after she'd gone to bed and left her teenagers to their own devices... 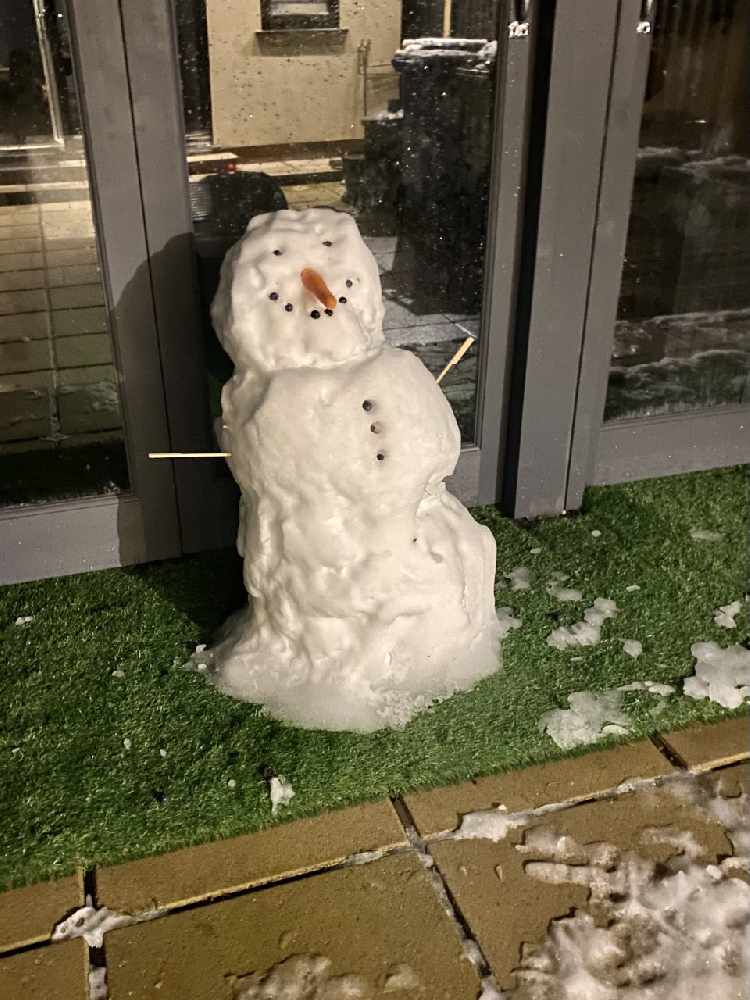 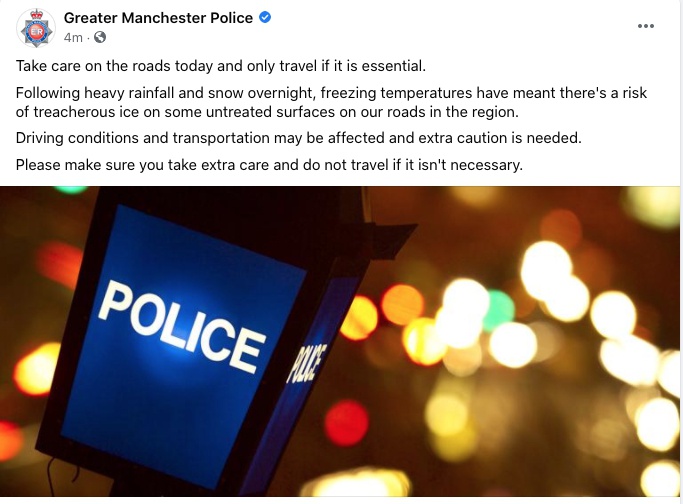 Send us your snaps of what the snow looks like in your part of the area via our Facebook page, tag us on Twitter or email adam.higgins@questmedianetwork.co.uk and we will include them in our live page here.

7.15am - Northern tells passengers 'do not travel' before 12pm on much of north west rail network

Northern is advising customers not to travel on many of its routes in the north west due to increasingly poor conditions following torrential rain across the region.

Routes covering the north of Manchester are affected by this Do Not Travel alert. A number of routes have experienced issues with flooding, and several have seen closures and significant disruption.

Anyone who needs to make essential journeys are to allow extra time for travel and to check carefully before setting off as the situation evolves.

As the rain continues to fall and flood waters rise, flooding is becoming more widespread and the rail industry say it is working hard to "deal with issues as they arise but it has become increasingly difficult to operate a reliable service".

Chris Jackson, Regional Director at Northern, said: “We have worked for the last few days, in conjunction with colleagues from across the industry, to keep our services operating. And, where possible we have supported those services with replacement buses when the flooding meant running trains was impossible.

“Unfortunately, we have had to make the difficult to advise our customers that they should not travel before Thursday 12pm across many of our north west routes.  The areas affected are those north of Manchester, Cumbria and Lancashire. Many of our services south of Manchester are still currently planned to run with some exceptions.

“The situation is constantly changing so I urge anyone who needs to make essential journeys over the next few days to allow extra time for travel and to check carefully before setting off.”

Flood waters are also affected roads across the region meaning the provision of rail replacement transport is also challenging. For up-to-the-minute information about rail services, visit National Rail Enquiries or @northernassist on Twitter.

7am - Snake Pass is still closed

The A57 Snake Pass remains closed after heavy snow overnight and Derbyshire County Council say it will review conditions once it gets light.

A statement on its website added: "The heavy rain, followed swiftly by snow, hampered gritting in the north west of the county last night.

"Crews have encountered drifting snow due to high winds and flooded roads also delaying some routes being completed. They have worked overnight to treat and re-treat primary routes.

"The challenging conditions mean that teams have been unable to treat secondary routes so drivers are asked to take extra care if travelling on untreated roads as there is a yellow weather warning for Ice is in place until 10am today."