How a young footballer is helping his club raise vital funds 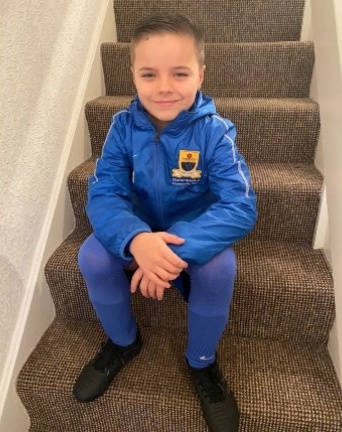 A budding young footballer will be pacing the streets of Glossopdale this weekend in order to raise as much money as possible for his grassroots football club.

Eight-year-old Mason Hinchley-Arrowsmith (pictured), from Hollingworth, is doing a sponsored 5k run in support of Tintwistle Athletic Football Club - where he has been playing for two years, having previously spent two years at the club’s Soccer School for younger footballers.

This time of year is normally busy for the community charter standard club, which has a first-class football centre at its West Drive base, as it organises tournaments and other fun events over the summer months.

But they have had to be cancelled this year due to the coronavirus pandemic, meaning the club - like many others - will miss out on vital funds.

So huge Everton fan Mason - who is in Year 3 at Whitfield St James’ CE (VC) Primary School - decided to come up with an idea to do what he can to help.

His mum Hannah Arrowsmith said: “Mason originally thought he would attempt a 5k with a football but then decided it might be a bit tricky to do this, so decided he would do a run after seeing a lot of the Tintwistle adult players running 5k for the NHS.

“He’s going to do a fairly flat run from Hollingworth towards Glossop and back on Sunday afternoon - down Brookfield and towards Dinting Vale and back.

“Mason is a really kind and thoughtful boy who has come up with the idea on his own. We are really proud of him for doing this to support his club. He’s been practising his running most days and keeping himself busy!

“He’s a strong Everton supporter, following in his dad’s footsteps, and is missing watching his favourite team on the TV, as well as missing playing himself.

“Tintwistle Athletic would usually be raising a lot of money at this time of year through tournaments and other events, so Mason’s run will have massively helped to get them through this hard time. A big thanks to all of the ‘Tinny Army’ who have supported Mason so far.”

Mason normally plays football every Saturday for the Under-8s team, who are part of the East Manchester Junior Football League Division One.

He has so far smashed his initial £150 target, raising more than £600 to date. If you’re able to support Mason, you can donate via his Just Giving page here: https://www.justgiving.com/crowdfunding/mason-hinchley-arrowsmith.