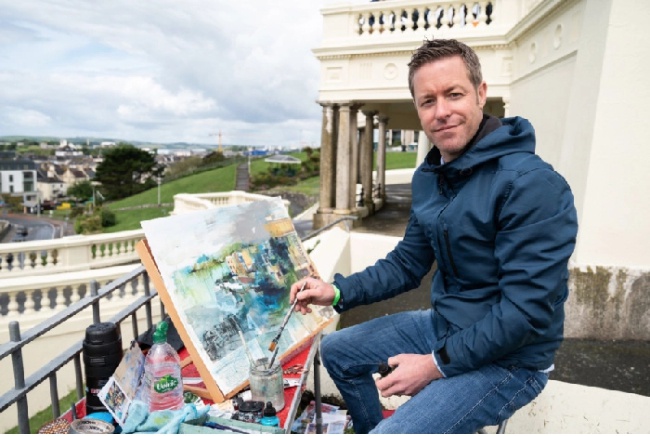 An artist in the High Peak will be showcasing his talents on a TV programme, in a bid to be named 'Landscape Artist of the Year'.

Rob Wilson (pictured), from Whaley Bridge, is a wildcard entry in this year's Sky Arts show - a Landscape Artist of the Year competition.

If the 44-year-old advances all the way to the final, he could win a £10,000 commission to create a landscape artwork of Venice - one of Italy's most famous attractions - for the prestigious Royal Institute of British Architects.

The first episode will be aired on Tuesday, October 15, at 8pm, in which Rob will be seen painting Plymouth Hoe - a large south-facing open public space in the coastal city - using a Plymouth newspaper from 1911 which he cut up and added to his painting.

"I have been a massive fan of this show for a while so I plucked up the courage and went for it and applied," said Rob, who lives on Hockerley Avenue.

“I didn't make it as a main contestant, but I’m one of the wildcards. It was brilliant to see behind the scenes of a show I like and see how it is made."

The Sky Arts series will be presented by Joan Bakewell and Stephen Mangan, with Tai Shan Schierenberg, Kate Bryan and Kathleen Soriano judging.