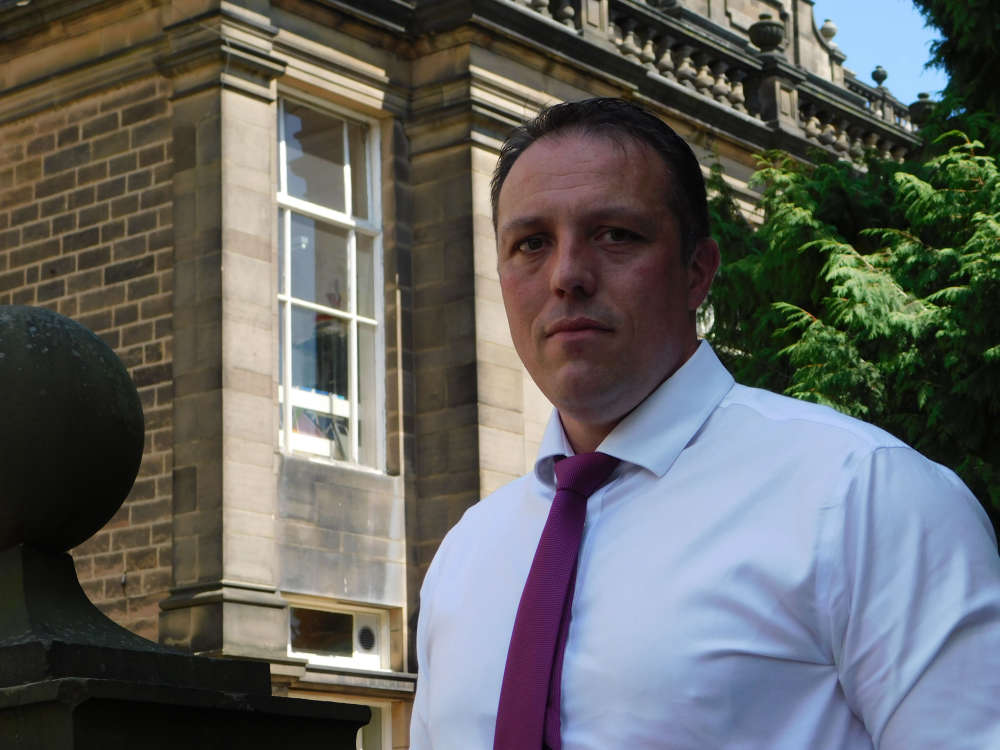 To the general public he is Derbyshire's public health director, to critics he is a "faceless bureaucrat" leading "nanny state" policies, but to his children he is a pandemic "superhero".

Dean Wallace has been public health director at Derbyshire County Council for six years but is now heading off to pastures new, into the NHS, having been the second-youngest holder of his current lofty position nationwide in 2016, at just 36.

Now 42, his new role will see him take the step up to become chief operating officer at Derbyshire Community Health Services NHS Foundation Trust, taking the helm from William Jones, who has now retired after decades in the NHS.

For many, Mr Wallace has been the public face of Derbyshire’s fight against Covid-19, providing health advice, updates around best practice for social distancing, face masks and hand hygiene and how to toe the line through the many different bouts of lockdown restrictions – local and national.

Speaking to the Local Democracy Reporting Service in the sunbaked grounds of County Hall, Mr Wallace said the criticism he received from the general public was one of the toughest parts of the pandemic.

He says that all too often residents forget that he was not unaffected by the very Covid policies he was ensuring were followed and the advice he had provided, with this critique becoming an intense mental burden. With the support of others he avoided a “breakdown”.

Mr Wallace explains that he was not able to attend his aunt’s funeral due to lockdown restrictions and that his father’s health had quickly spiralled down during the pandemic.

Sharing the news and restrictions of the pandemic – like not being able to see Grandma – with his eight-year-old son and six-year-old daughter was a further burden he, like many other parents, had to bear.

Pushing his duties far beyond a regulation shift became the norm and his wife took on the duties of home-schooling their children, with demands to tackle the pandemic described as “massive” and passing in a “blur” – missing out on valuable family time.

He says emotional and widespread practical support from his wife was crucial.

Mr Wallace speaks with pride as he recalls that his son, asked by his school to produce a report on pandemic heroes, looked up news articles about his dad.

He says he has always sought to maintain his own integrity throughout the pandemic, to speak the truth and to “say it like it is”.

“Some people felt I was just making things up, as if I wasn’t really living with the restrictions. People don’t consider that, they just want to rant, and I can take the flak. They just see a faceless bureaucrat”, he says.

Mr Wallace said: “Some people say we should have just carried on as normal (and not had lockdowns) but if we hadn’t had done what we did we would have seen infection rates and hospital rates increasing exponentially, the NHS wouldn’t have been able to do anything else other than Covid patients, the resilience would not have been there.

“With public health, you have to impact early enough, because the infections we were seeing were doubling in seven to 10 days, those infections have already happened and people take time to show symptoms and we did not have community testing to confirm.”

Talking about the challenges of the pandemic, Mr Wallace says the changes made during the past two years have accelerated what would normally have taken much longer to implement, including new duties for public health such as local testing and tracing duties.

His recollection of the start of the pandemic is as follows: “It was just the sheer enormity of it, it was information overload and trying to process all that intel.

“It was all about trying to get the message out about what we know so far. Things that we reel off now about face coverings and social distancing were not established then.

“At the start, we really just knew that something was happening in China and that we would have it soon, we needed to keep calm, look at the data and the epidemiology – of what little we had. It all started to snowball.

“None of us have ever seen a lockdown in our lifetime, it became reinforcing messages about staying at home, then isolating ourselves and supporting clinically extremely vulnerable people and carrying out welfare checks.

“We had to try and identify people in need of support and we repurposed library staff and trained them up as welfare staff.

“As you know, we had all the stuff about asking Government to give us the data (about Covid infections, such as location, occupation) and getting started with testing.

“We were the first in the East Midlands to start local testing after the trial in Liverpool, we were testing all our care home residents.

“Becoming the public face of it all was a really stressful position to try and manage.

“When I pushed for community testing most public health directors were more negative about it due to the lateral flow tests but I felt that the public needed to have something to latch onto to help them assess their risks, and I felt we will end up losing the public if we don’t do something.

“It felt really lonely going out and doing that and we were really fast to get that in place.” 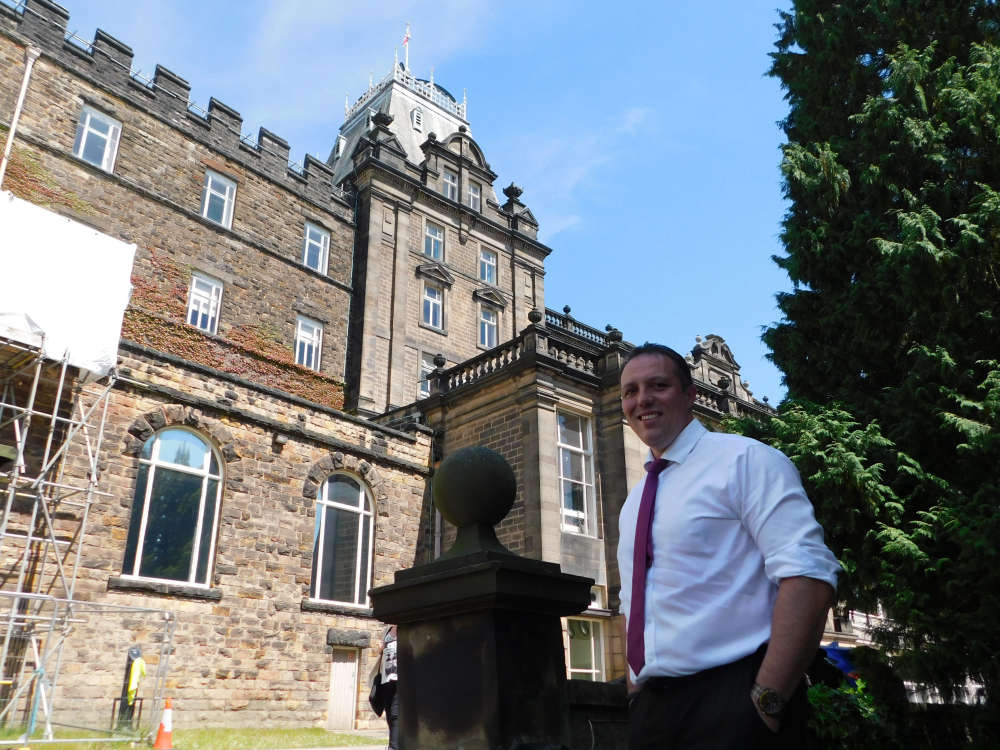 His career so far

Mr Wallace says that during his career he has often had bouts of “imposter syndrome” saying “someone like me usually doesn’t usually do these jobs”.

He was the first person in his family to go to university and applied to be the public health director for Derbyshire feeling there was “no way” he would be hired, starting his first day somewhat blurry-eyed after lack of sleep looking after his then one-month old daughter.

Before his current role, Mr Wallace, who has lived in the Chesterfield area of Derbyshire all his life, had studied sports science and worked at a number of private gyms and taught youth exercise activities in partnership with some district and borough councils.

He saw a newspaper advert for a job working in men’s health as part of the local NHS, visiting working mens clubs and miners welfare clubs.

After this he underwent public health specialist training before taking on a role in public health consultancy in both Halifax, in Yorkshire, and Derby.

Mr Wallace says looking back on the news articles he has featured in, the history he has been part of, is something he is looking forward to and is proud of.

He says that a huge constraint facing him and his team – which has grown from 68 staff to more than 500 through his tenure – is the reducing pot of money available to help boost preventive and reactive public health in the county.

Mr Wallace claims the money his department has now is almost a quarter lower than it was in 2016, losing £1 out of every £4, due to austerity measures and inflation.

In real terms, he openly confirms, this means there is not always the money available to offer the help to as many people as they would want to.

He says: “Covid changed everything. We possibly wouldn’t have developed as much without the pandemic. In two years we have probably had five years worth of development, with public health gaining a higher profile and taking on more services.

“We have not got enough money. Health and social care need to integrate, because the workforce just isn’t there.

“I’m not saying savings can’t be made and the financial context has led us to make innovations.

“Without the restrictions on our finances we wouldn’t have done some of that, but at the same time you can’t take 24 per cent of funding, £1 in every £4 and expect the same services.

“The pressures are different now, the situation is not the same, the impact of lockdown on mental health, growing waiting lists and the size of the ‘populations at risk’ grows.”

Mr Wallace said that while the public had been in apparent full support of the NHS during the peaks and early days of the pandemic, with clapping and rainbows “quite a bit of that has now fallen away”, saying “we need people to stay on board with the NHS, it has to be a shared effort, local government and the NHS rely on the public”.

He also suggests that “politics sees health as just the NHS”, saying this picture needs to change, with much of the work carried out in public health and social care keeping people out of requiring NHS services.

Mr Wallace warned that having a fraction of patients still being admitted to hospital due to Covid, not just with Covid, during a time when infections are likely to be at their lowest, poses cause for concern heading into winter, when there will be a Covid booster campaign and flu jab to roll out.

He said one of the changes which has been evident in public health, not just during his tenure, is that smoking remains highly prevalent in more deprived communities, whereas more affluent communities have shirked smoking in larger numbers.

This compounds the gaps around health inequalities, he says, with more deprived communities usually having other underlying health conditions and living in poorer quality housing and on lower disposable incomes.

Mr Wallace says he wants to help DCHS be the best organisation it can be, “Derbyshire is where I live and where I grew up and I want people to have high quality health services and to improve their health and wellbeing”.

He starts his new role at DCHS in September.