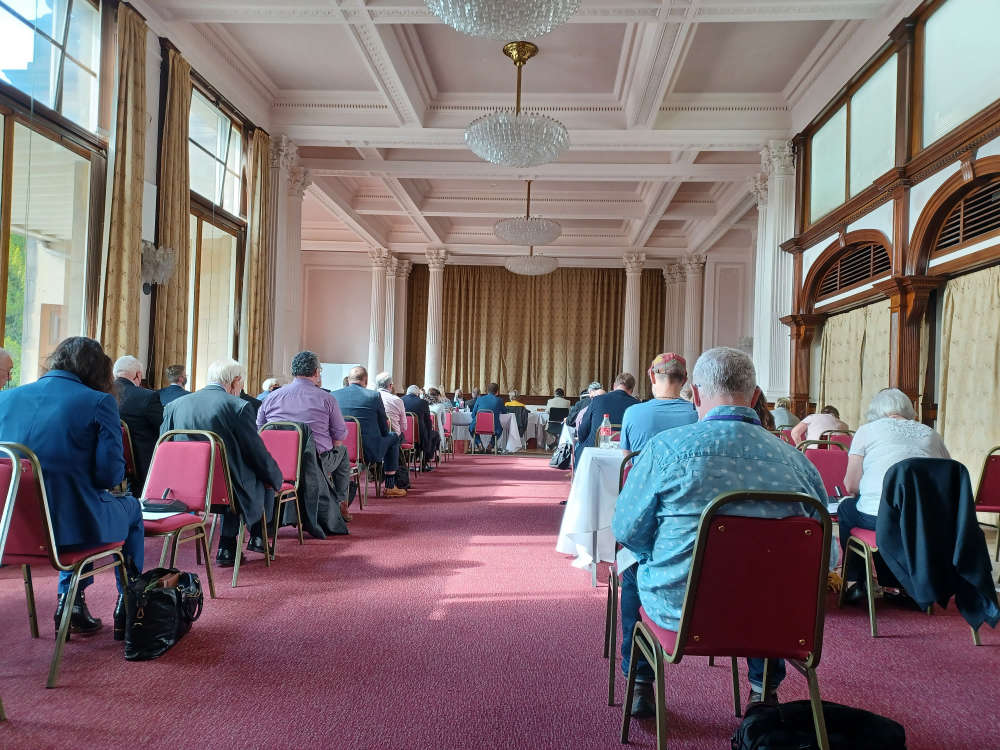 Councillors at the meeting on Wednesday. Image: Eddie Bisknell.

A Conservative-run Derbyshire council has brought back a top job with a salary of up to £176,000, despite its own leader opposing the size of the payslip.

The former chief executive role, cut four years ago by the incoming Conservative administration, had an annual salary of £138,000.

Cllr Barry Lewis, leader of the Tory authority, said in yesterday’s full council meeting, before approving the new salary: “I fully agree that no managing director (in local government) should have a salary greater than that of the Prime Minister.”

Cllr Lewis said: “We are still at the bottom of the pay scales for this role nationally and I am happy to review the senior officer pay scales.

“I do take the point on the salary, unfortunately that is the standard that has been set in the sector.”

The leaders of each of the parties on the county council all oppose the salary of the new role, but the Conservative majority saw the managing director job and its hiked salary approved.

Cllr Lewis said Labour represented the “pinnacle of hypocrisy” in opposing the return of the role, having called for it to be retained and backing the temporary reinstatement of the role before Christmas.

He said “pretending with all this faux outrage is not a good look” and was “disingenuous”, asking for Labour to “stop with the nonsense”.

Cllr Lewis denied that this was the chief executive role returning under a different name, despite the responsibilities remaining nearly identical.

He said the former role enabled the chief executive to “stand in front” of the council leader and block decisions, while the new role would not allow for that and would see the managing director give “clear, strategic guidance”.

Cllr Ed Fordham, leader of the Liberal Democrats group, said he first found out about the managing director role being made permanent through a call from the press.

He said: “I understand the salary proposal, which is unacceptable. This is an opportunity to look at the size of the salaries for senior management.”

She said she was unsure which film the return of the former chief executive role reminded her of, Groundhog Day or Back to the Future.

Cllr Dixon claimed that when the Conservatives came into power in 2017, they found that “some of the faces in senior management did not fit” and sought to “find a way to remove them”.

In 2017, the Conservatives scrapped the role of chief executive, assistant chief executive and strategic director of corporate resources in a bid to save £300,000 a year.

Cllr Dixon said: “What they (the Conservatives) haven’t got the guts to do is to say the cuts to strategic leadership was wrong.

Cllr Dixon said there were council caretakers, working in schools – now outsourced to a company run by Suffolk County Council – who are on £9.40 per hour and are only paid for 44 weeks of the year, during the school term.

She said: “Some of our people in Derbyshire are getting less than the minimum wage. We can’t justify this pay hike.

“Senior staff pay only seems to only go in one direction, up, while the lowest paid staff see their pay go down.”

Cllr Simon Spencer, Conservative deputy leader of the council, said: “We need to pay the appropriate salary. I am uncomfortable with the figure and so are many of my colleagues.

“I understand the concerns about the salary, but we are in a position where we have to pay the person what we have to to match the industry.”

Conservative councillors voted to approve the new role being made permanent, along with the raised salary, while Labour and the Liberal Democrats voted against.

Cllr Lewis confirmed that the council would be paying private firm Korn Ferry Hay Group £83,000 to review the levels it pays senior management.

The lowest salary listed within the county council is £17,840 a year – £9.25 an hour for roles such as school caretakers and cleaners. The new role will be nearly ten times that salary.