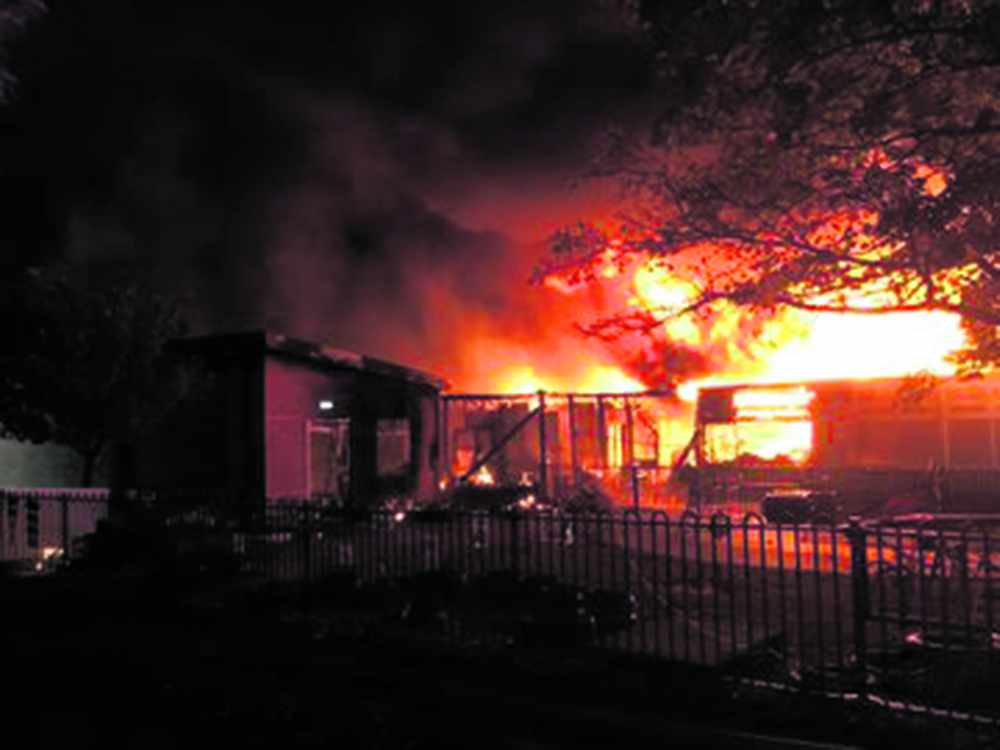 Council officials have refused to name the Derbyshire schools which do not have sprinklers – despite three being destroyed in blazes in the last four months.

In the past 131 days, three sprinkler-less Derbyshire schools, two of which are in Derby, have been devastated by fires, displacing hundreds of pupils and resulting in millions of pounds of rebuild costs.

And there have been more than 30 fires at Derbyshire schools in the past five years.

After the destruction of Harrington Junior School in Long Eaton, which did not have sprinklers, in May, the Local Democracy Reporting Service submitted a Freedom of Information request to Derbyshire County Council, asking it to name the schools without sprinklers.

The council had a legal duty to respond within 20 working days.

It chose to take nearly triple that time, 58 working days, before coming back this week, after the destruction of two further schools – Ravensdale Infant and Nursery School and St Mary’s Catholic Voluntary Academy – to say it would not be providing the names.

The authority has cited the perceived risk of potential arsonists targeting schools without sprinklers.

The LDRS has called its request in for an internal review, which means it will be reconsidered by the council. The council will also look at whether procedure was followed correctly.

The LDRS has also filed the same request to Derby City Council.

Simon Hobbs, the authority’s director of legal services, wrote in response to the request, three months after it was filed: “Disclosure of this information would be likely to endanger the safety of individuals as it may lead to specific schools being targeted by those who may contemplate attacks on public buildings, therefore, I consider the exemption to be engaged.

“Where sprinklers are installed in schools the primary purpose is to limit fire damage to school property when the building is empty, outside of school hours.

“During the school day fire alarm and evacuation procedures are in place in all schools to ensure pupils and staff evacuate the building quickly and safely.

“However, any person called upon to attend a fire out of school hours or who is in the immediate vicinity could be placed at risk if information regarding sprinklers is made public and subsequently used to target school buildings outside of school hours.

“There is a public interest in information relating to safety being released to promote accountability and transparency.

“However, the disclosure of the information relating to schools without sprinklers would potentially be used by individuals or groups who may target vulnerable buildings, putting individuals at risk of harm.

“I have balanced the arguments in favour of disclosing and withholding the information requested, however, the health and safety of individuals is the primary concern.

“The public interest is weighted in favour of maintaining the exemption.”

This week, Gavin Tomlinson, Derbyshire’s chief fire officer, and the National Fire Chiefs Council, called for government to make changes to legislation to make sprinkler systems in schools mandatory, rather than advised.

The NFCC said that sprinklers could have “substantially reduced” the damage caused to the two Derby schools, destroyed within 48 hours of each other over the weekend.

The fire at Ravensdale was ruled as arson, while the blaze at Harrington was accidental and caused by county council staff carrying out refurbishments. The cause of the fire at St Mary’s has not yet been disclosed.

Terry McDermott, Derbyshire’s former fire chief who retired last year, said: “As we know, sprinklers are pretty much 100 per cent effective when installed in the room where a fire starts.

“Sprinklers are expected to feature in almost all new schools. They do not. Loopholes and cost cutting are the reason.

“The regulations are being reviewed at the moment and the answer must be sprinklers in all new schools.

“The rate sprinklers are installed in new schools has dropped from 70 per cent of schools to about eight per cent.

“The cost is not always measured in pounds. It’s time for change.”

Cllr Barry Lewis, leader of the county council, said this week: “Our policy at Derbyshire County Council is that all new-build schools have sprinklers fitted. All significant extensions to existing too – and refurbs have them retro-fitted wherever possible.

“We fully support this approach. The human cost and heartbreak as well as monetary cost make it essential.”

However, a temporary replacement for Harrington Junior School, which the county council built without planning permission in July, was also built without sprinklers – despite the demise of its predecessor.

It had said this was “standard for temporary buildings of this nature”.

Derby City Council, in response to the two fire-hit schools, pointed the finger at national government policies over sprinklers in schools, despite it, along with the county council, having the power to install systems in all authority-run facilities.

Cllr Evonne Wiliams, the city council’s cabinet member for children and young people, said this week: “It’s totally unacceptable that these events happened, when there are fire safety measures that can prevent such devastation.

“There is currently no legal requirement for existing schools to have sprinkler systems.

“Since changes in Government guidance in 2007, retrofitting of sprinkler systems is an option that now must be included in the risk assessments when any major refurbishments are being considered, which is absolutely right.

“England is lagging behind Scotland and Wales when it comes to introducing legislation to fit sprinklers in schools, and the Government needs to act.

“There is now an expectation that all new build schools should fit sprinkler systems, and this is the case at the new Castleward school being built in Derby.”

In response, a Department for Education spokesperson said: “The safety of pupils and staff in schools remains our highest priority and all schools are required to have an up-to-date Fire Risk Assessment and to conduct regular fire drills.

“All new school buildings must be signed-off by an inspector to certify that they meet the requirements of building regulations, where sprinklers are considered necessary to protect pupils and staff, they must be installed.

“We are working closely with Derby City Council and St Ralph Sherwin Catholic Multi-Academy Trust to help support the schools and their pupils.”

It said a consultation on changes to fire safety design for new schools is to be launched shortly.

The department also said that “under the fire safety order, the responsible person has to carry out and review regularly a fire risk assessment of the building and put in place adequate and appropriate fire precautions to reduce the risk to life in the event of a fire to as low as reasonably practicable”.

In the past five years Derbyshire fire service has been called to 32 blazes at schools in the county and city, figures obtained in a Freedom of Information request from Zurich Municipal show.

The fire service said this week that eight of these have occurred since April 2019.

Mr Tomlinson said this week: “Sprinklers are one of a range of fire safety measures that would not only protect our schools from fire and prevent injuries, but they would also protect against costly rebuilds and of course, protect against the stress and anxiety caused to the children who need their education.”

“I am not sure what more evidence is needed to bring legislation in line with Scotland and Wales where it is mandatory for sprinklers to be fitted and for the Government here in England to take notice and more importantly, to take action – we have a responsibility to build safer schools.”

The fire which engulfed Ravensdale Infant and Nursery School.