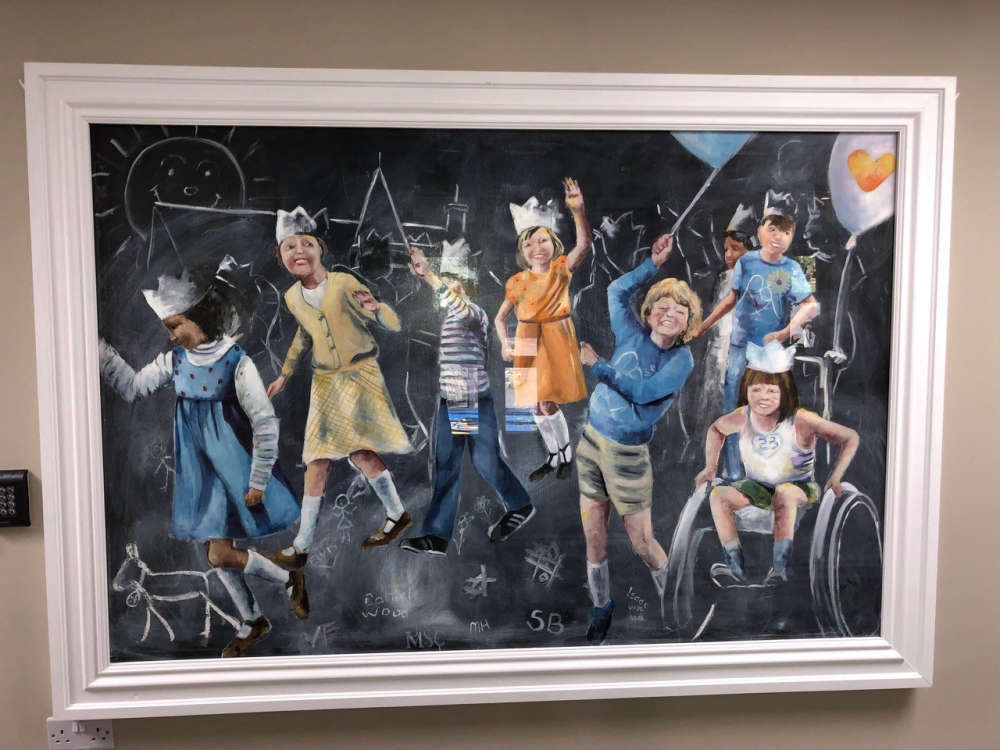 Glossop-based charity Reuben's Retreat has installed a significant piece of art which is full of special meaning.

The specially commissioned 6ft by 4ft painting, which took six months to create, is by renowned artist Lindsay Madden who has long been a supporter of the charity.

The stunning painting will hang in the Retreat and be one of the first things visitors see on arrival.

The theme of the painting came from a collaboration between Lindsay, who is based in Chester-Le-Street, and Nicola Graham, Reuben’s Mummy and Founder of Reuben’s Retreat.

Lindsay was introduced to the charity by The Hawthorn Gallery who gifted the charity two Lindsay Madden pieces back in 2014. Since then the artist has been a big supporter of Reuben’s Retreat and her bespoke piece features a parade of children and includes elements that act as a nod to the charity and its work as well as showing gratitude for key supporters who helped to bring the Retreat to fruition.

Eagle-eyed art fans will be able to spot ladybirds and the number 23 - symbols synonymous with the charity - as well as the Retreat itself and Reuben’s brother Isaac. Special touches also include icons dedicated to organisations and individuals who have been hugely supportive since the charity’s launch in August 2012.

Nicola said: "We are absolutely honoured and in awe of the painting Lindsay has created for us. It’s a huge piece and you discover something new every time you look at it. Lots of visitors have been moved to tears when seeing it hung in the Retreat for the first time because it is so spectacular and poignant.

"Lindsay has already donated other pieces of her phenomenal art to Reuben’s Retreat and her unique talent for evoking memories of childhood is such a perfect match for the charity and the work we do. We are so grateful for her kindness and the huge amount of time she has dedicated to creating this piece."

Lindsay added: "Reuben’s Retreat has a special place in my heart having created pieces for them as far back as 2014. I wanted this particular painting to convey the joy that can be found at the Retreat and it appears as if a parade is welcoming visitors as they arrive. As it is set on a blackboard style background, I am sure there are elements that can be added to the piece over the years as the charity grows and evolves."

To celebrate the unveiling of the Lindsay Madden painting, Reuben’s Retreat is asking local schools to create a name for the piece.

Details of the competition will be announced on Reuben’s Retreat’s Facebook page at: https://www.facebook.com/ReubensRetreat and entries can be emailed to: fundraising@reubensretreat.org

Despite crippling grief, his mum Nicola wanted to help families experiencing complex child illnesses or bereavement, ultimately offering them a place where they can relax, recharge, remember and rebuild.

The charity has so far also helped over 1400 individuals from across the UK, in the form of counselling, bereavement support, family days, animal, music and wellbeing therapy, peer support groups, sibling support, family breaks and much more.