Back in the saddle in memory of Rick 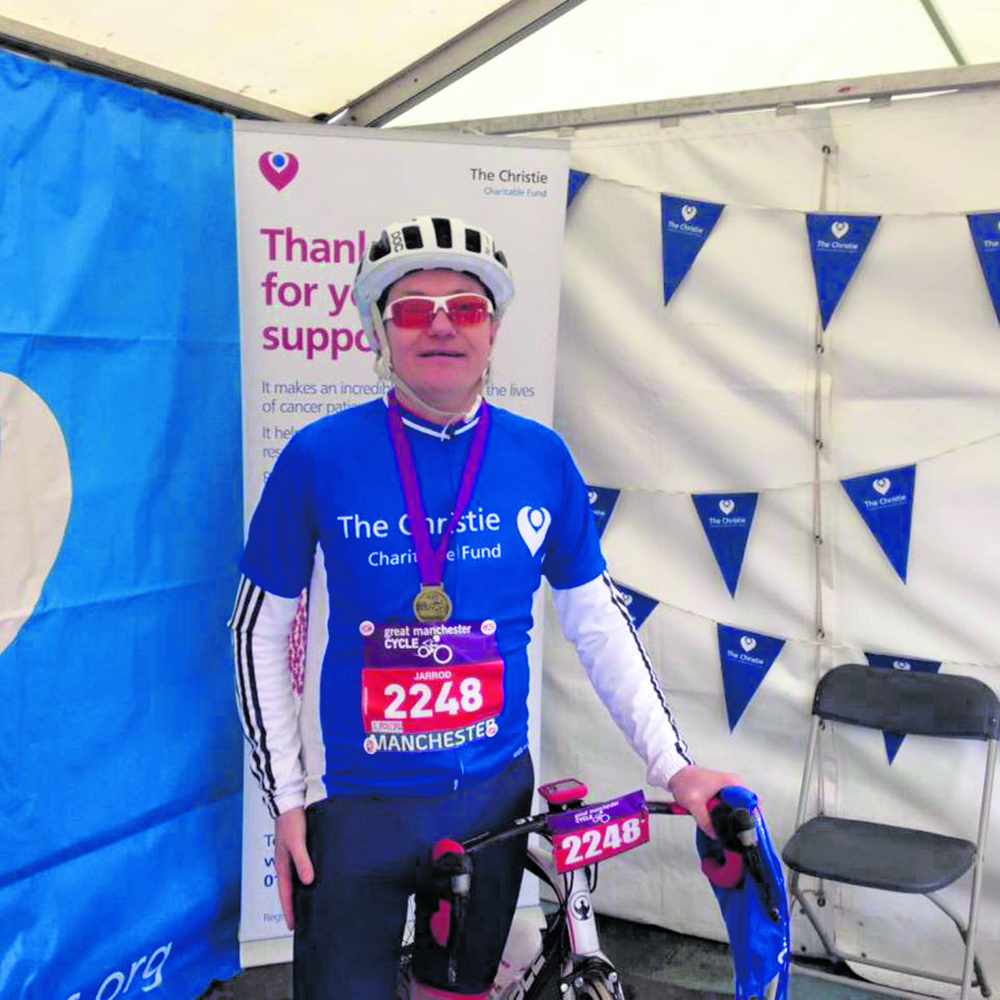 When Rick Ashton was diagnosed with cancer, he asked his brother Jared to honour him in a momentous bike ride.

His wife was pregnant, he was doing well in his career and Rick and his family were thinking about moving house.  And the cancer he’d been fighting since he was 20 was in remission.

But just a couple of months later the cancer returned and despite undergoing lifesaving treatment and surgery Rick died in March 2014.  He never got to meet his unborn son.

During his final days, Rick asked his brother Jarrod to do him a favour.  He wanted Jarrod to take part in the Manchester to Blackpool bike ride in aid of the Christie, as he wanted to give something back to the hospital that had treated him for 20 years.

Jarrod, from Hadfield says: “I’ve been keeping that promise ever since”.

Jarrod says, “In 2019 instead of the ride we ran for Rick. I did Rough Runner and Tough Mudder, hobbling all the way as I was waiting for surgery on my back. It’s all about changing it up to keep it interesting.  As long as I can do something each year for the Christie in my brother’s memory, I’m happy.

“This year my ride from Manchester to Blackpool is being held on July 4. I’ve also signed up for the London Revolution Ride 155 miles in September later this year.

“The last year has been hard on us all and money is tight so this year I’m doubling my efforts and working harder for your donations.

“Lockdown has meant that so many people have had to delay their cancer treatment.  While it’s good to raise money for such a good cause, it’s not just about the cash.

“It’s also Rick’s determination that cancer wouldn’t define his life that gives hope to so many people who are in similar situations... they hear his story and take inspiration from it. What Rick’s story has given people is hope and what greater gift can you give to people? If his story touches one person, then my job is done”.

The Christie is fundraising to build a new cancer research centre. With their partners The University of Manchester and Cancer Research UK, they are building a new world class transformational research facility to replace the Paterson building.

You can donate to help Jarrod and keep Rick’s legacy alive at https://www.justgiving.com/fundraising/Ride4Rick2021