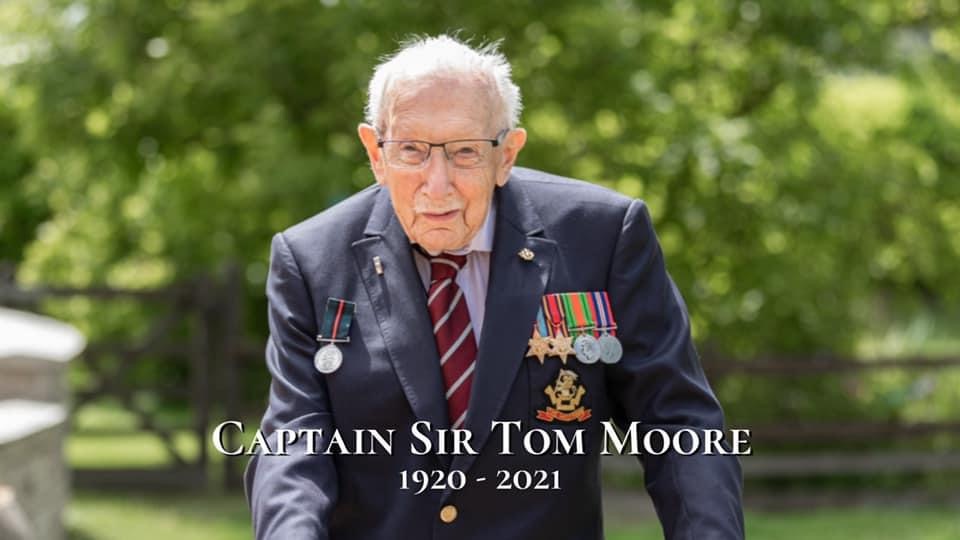 Local politicians and organisations have paid touching tributes to Captain Sir Tom Moore, who has sadly passed away at the age of 100.

Captain Sir Tom died in hospital with his family by his side on Tuesday (2 February). He had pneumonia for the last few weeks and last week had tested positive for coronavirus, before being admitted to hospital on Sunday with breathing difficulties.

The war veteran became a national treasure and lifted people's spirits during what was an extremely difficult year for the country in 2020, raising £32.7 million for NHS charities by walking laps of his garden at his Bedfordshire home.

He was knighted by the Queen last summer in a special ceremony and also became a honorary colonel, while more than 150,000 birthday cards were sent to him by well-wishers from across the globe to mark his milestone birthday last April.

Captain Sir Tom's family said in a statement: "We spent hours chatting to him, reminiscing about our childhood and our wonderful mother. We shared laughter and tears together.

"The last year of our father’s life was nothing short of remarkable. He was rejuvenated and experienced things he’d only ever dreamed of.

"Whilst he’d been in so many hearts for just a short time, he was an incredible father and grandfather, and he will stay alive in our hearts forever."

The flags at the town halls in Dukinfield, Glossop, Buxton and Matlock will be flown at half-mast on Wednesday as a mark of respect, the respective councils have said. 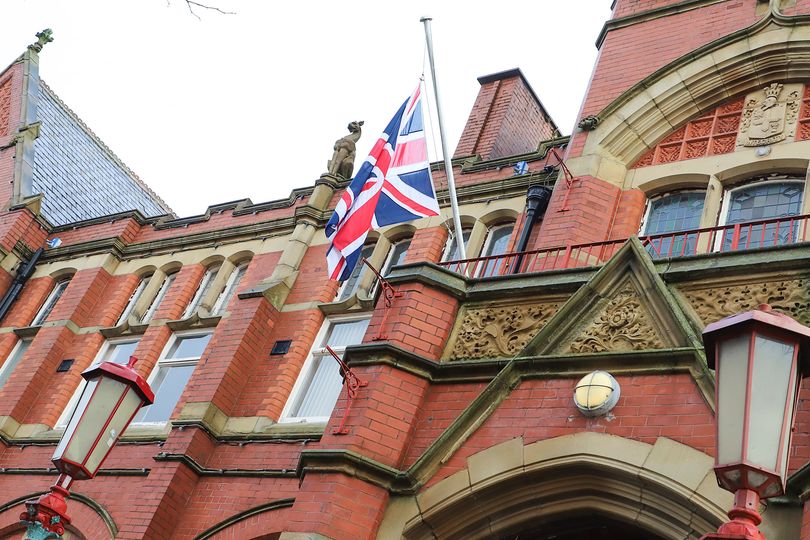 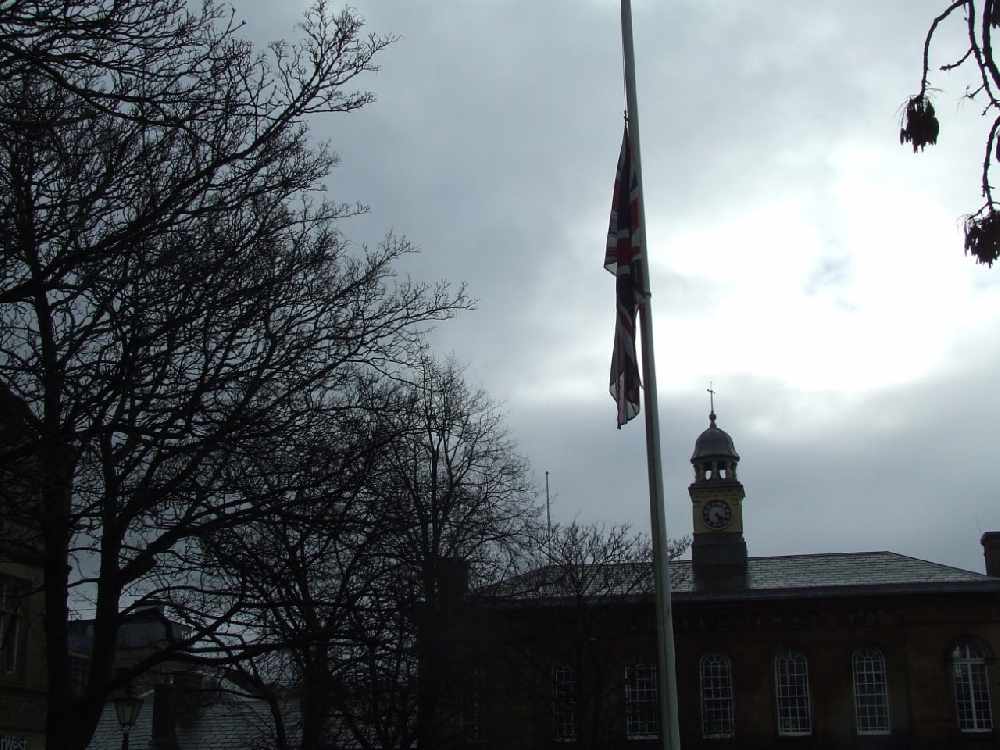 The flag at half mast on Norfolk Square in Glossop town centre. Photo: David Jones.

We’re flying the Union Flag at half mast today as a mark of respect for Captain Sir Tom Moore. He was a beacon of light and hope, and inspired people all over the world to unite during these difficult times. pic.twitter.com/fFnJfMuZIi

Prime Minister Boris Johnson has also said he is encouraging everyone to join in a national clap for Captain Sir Tom Moore and health workers on Wednesday evening at 6pm.

Back in September, we reported that proud teenage soldier Brodi Oldham, from Mossley, celebrated his passing out parade with an inspection by none other than Captain Sir Tom, who was carrying out his first duty as honorary colonel by inspecting the junior soldiers. Brodi, who went to Mossley Hollins High School, was among the graduates. 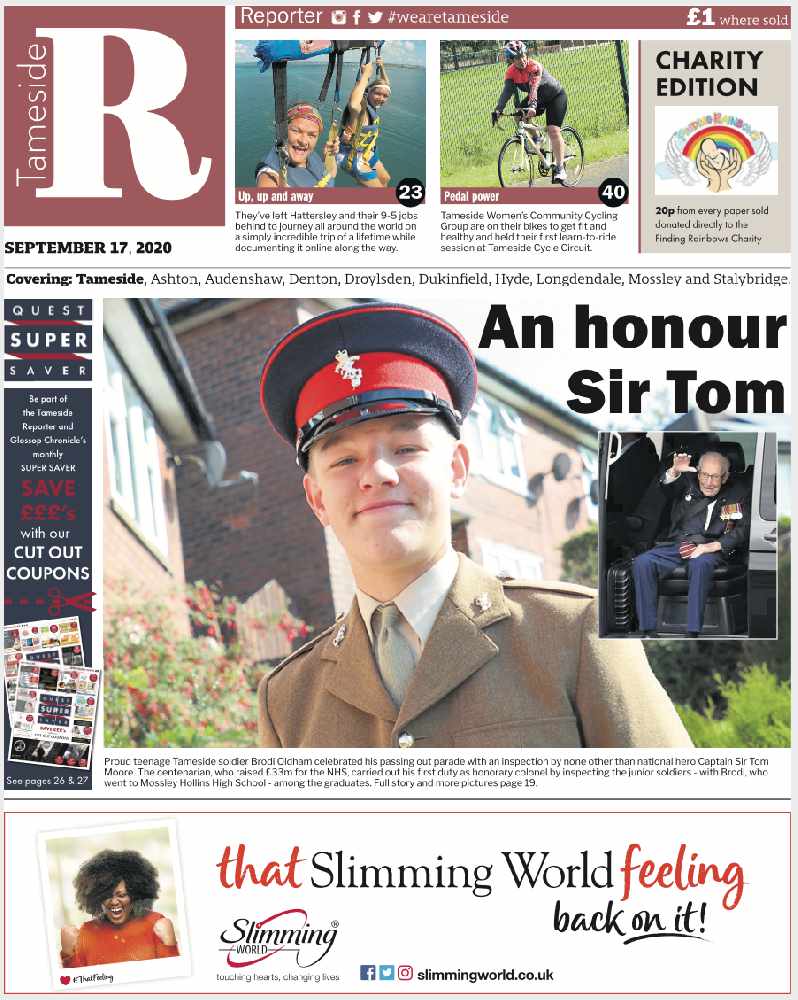 FLASHBACK: Captain Sir Tom Moore featured on the front page of the Tameside Reporter on 17 September 2020

Brodi Oldham, who is currently away at MOD Lyneham, said he was deeply saddened upon hearing the sad news of Captain Sir Tom's passing.

He said: "I felt truly honoured to be one of the first and last junior soldiers to be inspected and passed out of AFC Harrogate by the honorary colonel.  He was such an inspiration to all us new recruits with his inspiring achievements."

Ashton-under-Lyne and Failsworth MP Angela Rayner tweeted: "You served our country throughout your life and last year you were a light in the darkness and provided us all with hope. Your legacy will serve as an inspiration to all of us. Thank you. You truly were the very best of us."

You served our country throughout your life and last year you were a light in the darkness and provided us all with hope. Your legacy will serve as an inspiration to all of us. Thank you. You truly were the very best of us. https://t.co/FUKI56PJis

High Peak MP Robert Largan said: "Very sad news. A remarkable man and an inspiration to so many. Rest in peace, Captain Tom."

Very sad news. A remarkable man and an inspiration to so many. Rest in peace, Captain Tom. https://t.co/RjIzZy1Ajg

Stalybridge and Hyde MP Jonathan Reynolds said on his Facebook page: "I’m terribly sad to learn that Captain Sir Tom Moore has died. We owe him a debt of gratitude for inspiring the nation when we needed it the most.

"His generation have given so much to Britain and asked so little in return. My children were among 125,000 people to send him a 100th birthday card, and needed a wee hug on hearing this news. Rest in peace, Sir."

Councillor Brenda Warrington, Tameside Council leader, said: "I was very saddened to hear of the death of Captain Sir Tom Moore. His inspirational fundraising to support the NHS in his 100th year was a real beacon of hope & optimism in the bleakest of times. My condolences to his family. May he rest in peace, while his memory lives on."

I was very saddened to hear of the death of Captain Sir Tom Moore. His inspirational fundraising to support the NHS in his 100th year was a real beacon of hope & optimism in the bleakest of times. My condolences to his family. May he rest in peace, while his memory lives on.

My condolences to the family of Captain Sir Tom Moore, who has inspired and acted as a beacon of hope to many with his fundraising efforts to support the NHS in his 100th year, may he RIP.

As a mark of respect, the @HighPeakBC flags in Glossop & Buxton will be flown at half-mast https://t.co/1RZqkdFZ3p

Councillor Barry Lewis, leader of Derbyshire County Council, said Sir Tom was "an amazing and remarkable man that became the bright light of the first lockdown".

Farewell and rest in peace. Sir Tom was an amazing and remarkable man that became the bright light of the first lockdown...

Greater Manchester Police said he was "truly an inspiration and beacon of hope in uncertain times, capturing the heart of a nation".

Rest in Peace @captaintommoore He was truly an inspiration and beacon of hope in uncertain times, capturing the heart of a nation. Our thoughts and condolences go out to his family and friends at this difficult time. #RIP 💙 https://t.co/hNuUhDnZlg

Hardyal Dhindsa, Derbyshire's Police and Crime Commissioner, said: "R.I.P Sir Captain Tom Moore. You captured the heart of a nation, right when we needed you most. We were humbled by your efforts for others. Now we mourn your passing with your loved ones.

"To Sir Tom’s family, I send my deepest condolences. Thank you for sharing him with the world. We now share in your pain."

Rest In Peace Captain Sir Tom Moore. He inspired us with his resilience, courage and optimism. @DerbysPolice thoughts are with his family and friends.

Tameside and Glossop Integrated Care NHS Foundation Trust, which runs Tameside Hospital, said: "Thanks for everything you did for the NHS Captain Sir Tom Moore, forever in our hearts."

Thanks for everything you did for the https://t.co/jcwsLzQ58e Captain Sir Tom Moore, forever in our hearts. pic.twitter.com/UtHEYfc9yA

We are saddened to hear of the passing of Captain Sir Thomas Moore a hero who led an incredible and remarkable life and held up our nation at the darkest of times. Our thoughts are with his family and friends at this time. #RIPCaptainSirTomMoore

National tributes to a national hero

Paying tribute, Prime Minister Boris Johnson said Captain Sir Tom Moore was "a hero in the truest sense of the word" and became "a beacon of hope for the world."

The flag above 10 Downing Street has also been lowered to half mast as a mark of respect.

The Royal Family said The Queen is sending a private message of condolence to Captain Sir Tom's family and she "very much enjoyed" meeting him at Windsor last year.

The Queen is sending a private message of condolence to the family of Captain Sir Tom Moore.

Her Majesty very much enjoyed meeting Captain Sir Tom and his family at Windsor last year. Her thoughts and those of the Royal Family are with them. pic.twitter.com/nl1krvoUlW

This is incredibly sad news.

Captain Tom Moore put others first at a time of national crisis and was a beacon of hope for millions.

Britain has lost a hero.

NHS Charities Together, for whom Captain Sir Tom raised millions of pounds, said "we owe him so much" and everyone is "devastated".

Ellie Orton, Chief Executive for NHS Charities Together, said: “Captain Sir Tom Moore was a complete inspiration to us all and he did more than anyone to raise vital funds to support NHS patients, staff and volunteers during this crisis, when help was most needed. We owe him so much and we are devastated at today’s news. Our hearts go out to his family.

“Thanks to his amazing efforts, funds have reached the length and breadth of the UK through every one of our 241 member charities, and they have made a huge difference on the ground, both to address the immediate needs of patients and staff and to support the longer-term recovery of the NHS.

“Captain Sir Tom inspired so many people to take on their own extraordinary challenges, from running marathons to swimming lakes, and he gave us all hope. He showed NHS patients and staff who were struggling that people cared, that they were looking out for them and doing what they could to support them.

“Captain Sir Tom was a one-off and he leaves the world a better place. It has been a complete privilege to be associated with him. His legacy will be felt for years to come by all of our NHS charities and the patients, staff and volunteers we support. When the time is right, we will put together a suitable tribute to Captain Sir Tom, in honour of everything he did for NHS charities.

“Thank you, Captain Sir Tom. We will miss you and we won’t ever forget you. Our thoughts are with your family and friends.”

Ruth May, chief nursing officer for England, said: “On behalf of everyone in the NHS, I want to pay tribute to Captain Sir Tom Moore who has been the model of all that has been good about our country’s response to Covid-19.

“People rightly marvel at the tens of millions of pounds Captain Sir Tom raised for the NHS, but for me, his biggest achievement and most important contribution to helping my fellow nurses, doctors and all those in the NHS responding to coronavirus, has been how he brought the country together and gave us all a boost when we most needed it.

“I also want to echo the thanks of Hannah and Lucy to my colleagues who have cared for Captain Sir Tom in his final days, and I am proud that the NHS was able to offer Captain Sir Tom and his family compassion, skill and dedication when they most needed it.”

The Royal British Legion said: "We’re deeply saddened to hear of the passing of Captain Sir Tom Moore. He epitomised the spirit of our wartime generation and was a true inspiration to millions, bringing us all together in the most challenging of times. He was passionate about our work and we are incredibly grateful for that. He will remain a symbol of hope and will be deeply missed."