The heroes who have helped save lives, a year on from first Greater Manchester Covid jab 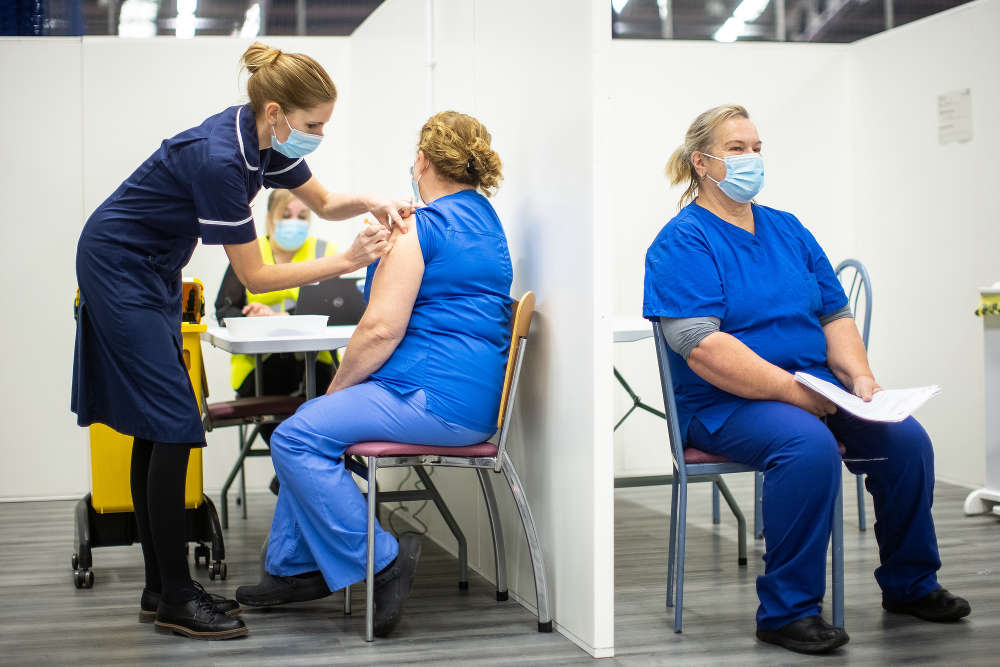 A Covid jab being given at the mass vaccination centre at the Etihad Tennis Centre.

Tributes are being paid today to the 'extraordinary' people who've set up and delivered Greater Manchester's Covid-19 vaccination push, getting almost five million jabs into arms in just 12 months.

December 8 is the first anniversary of the first jab given in Greater Manchester – to 86-year-old Ted Jones at Salford Royal. It is estimated that the city-region’s Covid-19 vaccination programme has so far saved 8,000 lives.

Tens of thousands of committed public services staff – backed by a dedicated volunteer army - have delivered an average of 100,000 vaccinations every single week, equating to 14,285 per day.

Vaccination clinics across the city-region – in hospitals, GP surgeries, pharmacies, sports halls, community centres, schools and even the odd car park - have been running flat-out, seven days a week and often into the evening.

The gargantuan effort has meant that just under two million people have received both first and second vaccine doses, and around 700,000 have so far had third doses or boosters. These numbers continue to grow day after day.

Greater Manchester Health and Social Care Partnership has produced a video (which you can watch below) to celebrate the efforts of everyone who has helped to deliver the vaccination programme, and continues to do so.

Sarah Price, Interim Chief Officer of Greater Manchester Health and Social Care Partnership, said: “As we reach the first anniversary of the first Covid-19 vaccination in Greater Manchester I want to pay tribute to every single person who has stepped up to get us to this point.

“Together, we’ve delivered around five million life-saving vaccinations, and we’re still going. Our health and social care teams, staff from other public services and other dedicated professionals have come together with our many incredible volunteers to make this happen.

“Put simply, tens of thousands of extraordinary people have moved heaven and earth to deliver Greater Manchester’s vaccination programme. And because of them up to 8,000 lives in Greater Manchester have been saved. That really is something to celebrate.”

Christine Khiroya, Lead for Screening and Immunisation at Greater Manchester Health and Social Care Partnership, said: “With uncertainly around Omicron and any future new variants we won’t be able to take our collective feet off the gas regarding vaccination.

“All of Greater Manchester’s vaccination centres, and the amazing teams who run them, will continue to be working at pace to deliver the booster programme, along with ongoing first and doses, as we seek to get as many people as possible protected.

“While we are keen to thank everyone who has had a hand in the planning and delivery of Greater Manchester’s vaccination programme, we also want to pay tribute to every single person who has turned up to have their jab! It really will make the difference in us getting ahead of this virus, and beating it.”

Typical of the ‘above and beyond’ attitude of so many contributing to Greater Manchester’s vaccination programme is Alan Hill, a vaccinator at the Manchester Mass Vaccination Centre at the Etihad Tennis Centre.

On his first shift Alan noticed that centre staff did not have official name badges – so he went home and created one for himself. Then colleagues noticed, liked what they saw and asked Alan to make them one too - so he did and has since made 1,400 in total!

By asking people for a small charity donation per badge Alan has raised £1677 for Tameside, Oldham and Glossop Mind (TOG Mind).