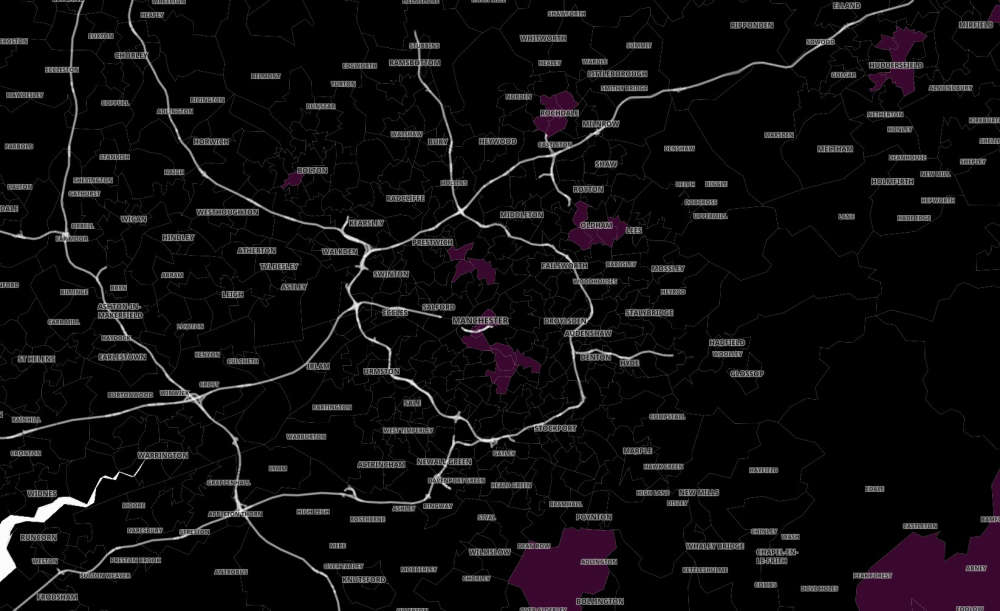 The spread of the Omicron variant of coronavirus has seen infections in the region reach eye watering levels in recent weeks.

A total of 63,308 people tested positive for coronavirus across Greater Manchester in the week ending January 5, the data reveals.

However some neighbourhoods are seeing local infection rates of more than 3,000 following the Christmas period.

The area of Ordsall and Salford Quays recorded the highest number of cases in the region with 459 people testing positive in the week to January 4.

According to the latest local data, the top ten local infection ‘blackspots’ for the virus are spread across Salford, Wigan, Tameside and Bolton.

The data reveals that there are also no areas in the region where cases of the virus are now in single figures, and only one neighbourhood still in double figures with everywhere else recording cases in the hundreds.

In the week to January 4 the latest hyperlocal data shows the biggest hotspot was Swinton West in Salford.

In second place is Swinton South East and Pendlebury West, also in Salford where there were 210 cases and the rate was 3,567.2.

Stalybridge North in Tameside is in sixth place.

Leigh East and Higher Folds, in Wigan, had a rate of 3,338.3 in the week to January 4, with 293 people testing positive for coronavirus.

In eighth place is the Salford neighbourhood of Winton and Westwood, where 244 cases of the virus were recorded.

Finally Wigan Marylebone and Bottling Wood, in the borough of Wigan, is in tenth place with 260 cases and a local infection rate of 3,189.4.

At the other end of the scale, Broughton Park in Salford has the lowest infection rate in the region, standing at 1,020.3 with 75 new cases.

It is followed by Fallowfield Central in Manchester with 13 cases and a rate of 1,079.9.

This was a rare drop of three cases from the previous seven day period.

In third place is the Manchester neighbourhood of University North and Whitworth Street, where 120 people tested positive in the week to January 4.

In fifth place is the Oldham area of Alexandra Park.

However this was a drop of 26 cases from the previous week.

Rumworth North in Bolton is in seventh place with a local rate of 1,271.1, and 112 cases recorded in the week to January 4.

Deeplish in Rochdale also makes it into the top ten areas with the lowest infection rates with a rate of 1,302.2 and 130 new cases.

Wardleworth and Newbold Brow, also in Rochdale is in ninth place with 133 incidences of the virus, resulting in an infection rate of 1,317.4.

Finally Hulme and University in Manchester is in tenth place with a rate of 1,320.4 from 194 new cases.