The current Covid-19 'hotspots' and 'notspots' in Greater Manchester 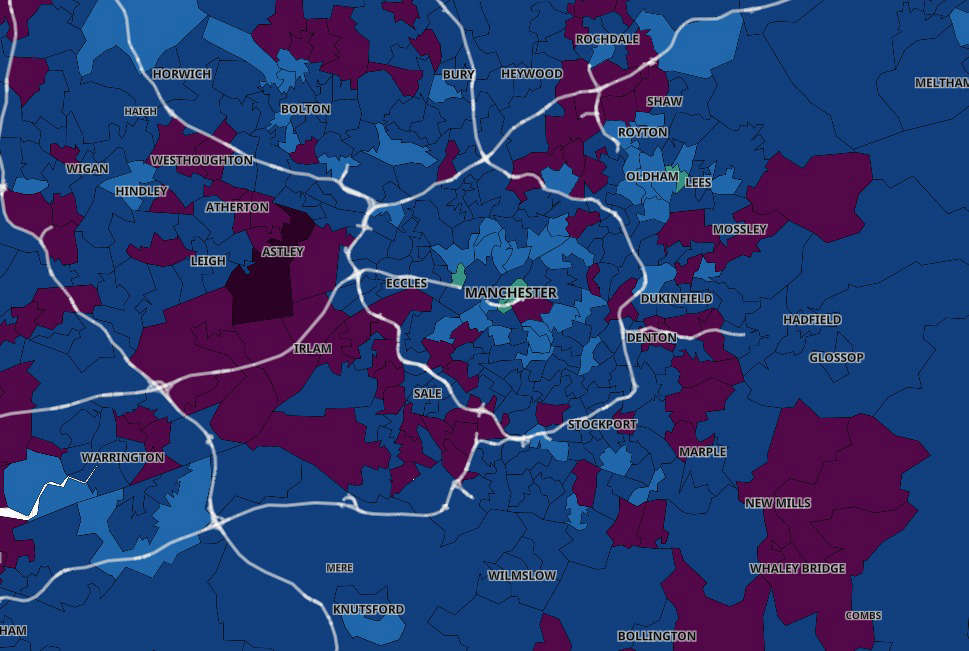 Covid-19 cases in Greater Manchester in the week to November 11. Photo: Gov.UK.

The biggest Covid-19 hotspot in the region has emerged in Wigan after cases more than doubled in one neighbourhood.

The ten areas where the highest infection rates are being recorded are in Wigan, Stockport, Bolton, Tameside and Rochdale.

Conversely neighbourhoods in Manchester, Salford, Oldham and Bolton have seen the lowest rates in Greater Manchester.

There were eight areas in the conurbation where cases were in single figures for the week to November 11.

Top is Astley, Blackmoor and Mosley Common in Wigan were the rate was 953.7, with 81 cases.

This was an increase of 33 from the previous week.

In third place is Dunscar and Egerton in Bolton where there were also 52 cases, equalling a rate of 697.1.

Cases there have risen by 24 since the last seven day period.

The Tameside neighbourhood of Carrbrook and Micklehurst is next with a rate of 650.6 and 47 new cases.

Worsley Mesnes and Hawkley, another Wigan area, is in fifth place with 47 cases, equalling a rate of 648.8.

Heaton Mersey in Stockport, an area that has consistently appeared in the top ten hotspots is next with an infection rate per 100,000 of 592.5 and 47 cases.

The only Rochdale neighbourhood to make it into the top ten hotspots is Spotland Bridge, where the rate was 579.3, and 49 cases of the virus were reported.

In the ‘notspots’ list, the area of University North and Whitworth Street in Manchester is once again top.

It saw just eight cases, equalling a rate of 72.1 in the week to November 11.

Next is Pendleton in Salford where the rate was 75 with only five incidences of the virus recorded.

A spate of Manchester neighbourhoods follow, starting with Piccadilly and Ancoats in fourth place with 19 cases and a rate of 96.4.

Next is Hulme Park and St George’s with seven cases and a rate of 103.6.

And then Belle Vue and West Gorton where its 11 cases equalled an infection rate of 105.7.

The Salford neighbourhood of Broughton Park is in eighth place wit ha rate of 108.8 and eight cases.

Oldham Town South is next with ten incidences of the virus and an infection rate of 112.3.

The Bolton area of Astley Bridge and Waters Meeting had a rate of 123.2 for the week to November 11 with 11 new cases.