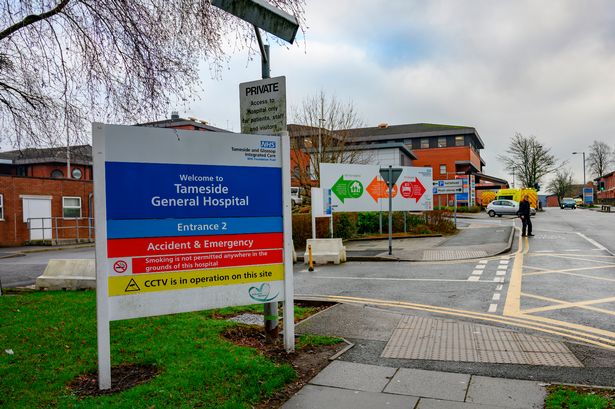 More people died of coronavirus in Tameside hospital in one week than anywhere else in the country.

Cases of the virus are currently rising sharply in the borough with an infection rate of 93.6 per 100,000 people for the week to Friday, September 11.

That is one of the highest rates in the country – and second only to Bolton in Greater Manchester.

But unlike Bolton, where cases are predominantly among younger healthy residents, a larger number of older people in their 50s and 60s are contracting the virus in Tameside.

This has led to a marked rise in hospital admissions – and has also seen outbreaks occurring within care homes.

It is understood that of the 35 new hospital admissions in Greater Manchester in the week to September 8, 10 of those were at Tameside Hospital.

In the seven days to September 10, 13 people have died at the Tameside and Glossop Integrated Care NHS Foundation Trust (ICFT) from Covid-19.

The deaths are mainly among older people with other underlying health conditions.

The borough’s director of public health, Jeanelle de Gruchy, told a scrutiny meeting on Thursday that the local restrictions on socialising imposed on Greater Manchester ‘haven’t had the impact that we would have hoped’.

“Unfortunately every day is currently bringing a rise in the rates. The latest data suggests that the rate is going up really quite quickly now,” she said.

“We have got activity in the hospital which means that we’ve got an increase in over 65s.

“We’re a bit ahead of everyone else I think, so the increase in community transmission is very worrying in that it’s now impacting on our care homes and in older people in the community

She added: “We’ve had 13 deaths in the last seven days at ICFT and it is the highest number in the country. So worrying and of concern.

“We also know that generally there are more people who are symptomatic because calls to NHS 111 have gone up, so it’s just a very worrying picture and it is spread across the borough.”

The majority of new cases in Tameside are being caused by ‘household transmission’, and they are occurring all across different towns and wards.

There has been one ‘small’ outbreak in a hospitality setting. However many residents have also been involved in virus outbreaks in other boroughs.

According to the government dashboard, there were 192 positive cases in the week to September 7.

But rather than being able to pinpoint an exact cause for a spike, leaders say it appears that Covid-19 has been ‘endemic’ in some areas of Greater Manchester and Lancashire.

“We didn’t have anything as specific as Blackburn or Oldham or even one could argue Bolton which seems to have quite a specific infamous pub crawl in a young person returning from Spain,” Ms de Gruchy added.

“We haven’t got anything like that. It’s always been pretty widespread and no obvious concentration anywhere. Too many people indoors, and not enough cleaning.

“We do have ongoing situations in the hospital and in the social care, care homes unfortunately – slightly different to active outbreaks in that we have the regular care homes testing and that picks up cases and enables us to respond very quickly. The hospital has routine testing as well."

“We are concerned about the number of cases in care homes," she added.

In the week to September 10 there were 24 cases of coronavirus among Tameside care homes residents and staff, compared of an average of 18 across August.

Chief Inspector for neighbourhoods at Tameside GMP, Lee Broadstock told a press briefing on Friday that there had been ‘a lot of demand’ on police around households mixing and parties.

At the beginning of local lockdown restrictions GMP were seeing more than a hundred calls every week in August around licensed premises breaking the rules, and house parties.

Police were also aware of people not wearing face coverings on public transport and a new area of ‘real concern’ is residents returning from holidays abroad and not self-isolating for 14 days on their return.

Officers have seen a ‘number’ of these cases over the past week, he added.

On Thursday night cabinet member for health, Councillor Eleanor Wills said: “It’s obvious to me that people aren’t adhering to the local lockdown measures within Tameside.

“I would say a huge majority of people that I have come across have had people in their homes that live outside of their homes, have had grandparents come and pick their kids up from school. They’ve kind of taken to normal life.”

Tameside has been testing large numbers of people but, as in many other places in the country, recent problems have arisen with residents struggling to access tests.

Assistant director of population health, Debbie Watson said: “In Tameside we’ve been looking to priority test people with symptoms in the community.

“We have had some issues with our local testing situation and nationally there has been an issue around capacity, not necessarily around swabbing but around lab capacity for tests.

“The government are working to increase lab capacity at the moment but we have an issue with local residents who have struggled to get access to testing and we think that problem is probably going to be with us for another couple of weeks yet.”

They are looking to create a permanent testing site in the borough which would be open from 8am to 8pm, seven days a week which would be a ‘real positive resource’ and allow residents to get quick access to testing.

Speaking on Friday, council leader Brenda Warrington said the rise in new cases in the borough is ‘extremely concerning’ and they are seeing more older people having to be hospitalised with the virus.

“We know that it’s going to take action and compliance from each and everyone of us in Tameside, we need us all to curb this,” she added.

“We don’t want further restrictions and we certainly don’t want to be following in the footsteps of Bolton but believe me that is a real possibility if we in Tameside don’t act now to contain the virus.

“It’s vital that people don’t mix with people outside of their own household or their support bubbles indoors or in private gardens.”