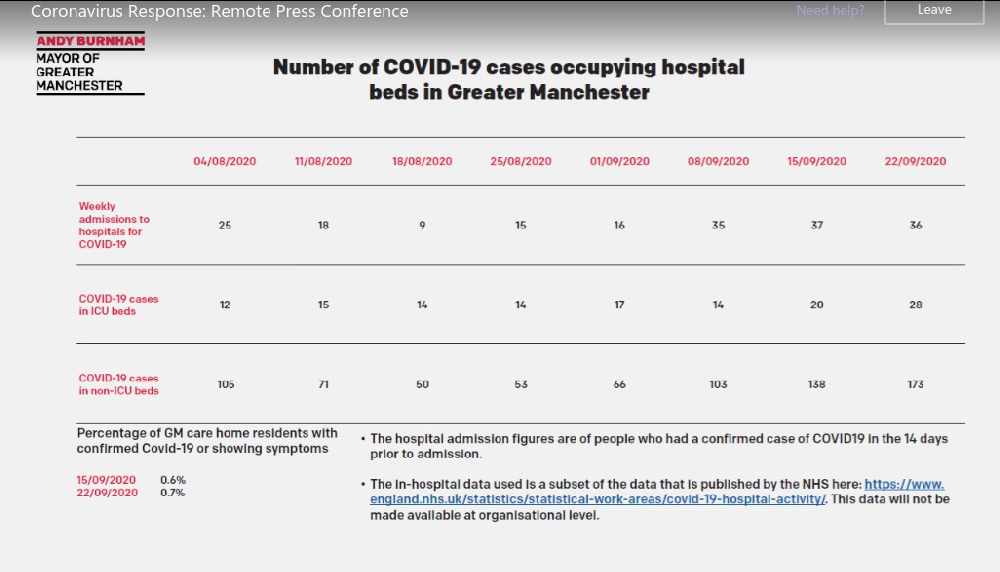 The number of people in intensive care with Covid-19 has doubled in Greater Manchester over the last two weeks.

There were 28 people in hospital ICU beds during the week ending September 22, compared to 14 just a fortnight earlier, according to the latest NHS figures.

The data also shows a rise of eight cases from the previous week.

While the numbers are nowhere near those at the height of the pandemic, local leaders are understood to be keeping a close eye on the situation.

The statistics were revealed by Greater Manchester Mayor Andy Burnham at his weekly press conference.

A ‘significant’ and ‘sustained’ rise in the number of Covid sufferers being admitted to non-ICU beds since early September is also adding to concerns.

Mr Burnham said the figures were worrying but it was important to keep a sense of perspective.

He said: “To put this in context, if you were to look at the figures at the peak of the first wave we had 226 people in ICU beds across Greater Manchester and 1,04  in non-ICU beds. That would be six times higher than what we have got now.”

But the Mayor stressed that leaders were aware that the numbers were moving in the wrong direction.

“There’s no complacency,” he said.

“The numbers are creeping up – in terms of the number of patients in hospital – but it’s happening in quite a steady way at the moment. And of course we will continue to keep a close eye on that, as we will with our care homes.”

In the week to September 22 there were 173 Covid patients admitted to non-ICU beds – a significant leap from the beginning of the month when the figure stood at 66.

While the Mayor has urged a sense of proportion, he will draw little comfort from the figures ahead of what he has admitted will be a ‘challenging’ autumn and winter period.

The hospital admission figures are of people who had a confirmed case of Covid-19 in the 14 days prior to admission.