How Oldham Council is preparing to deal with coronavirus crisis 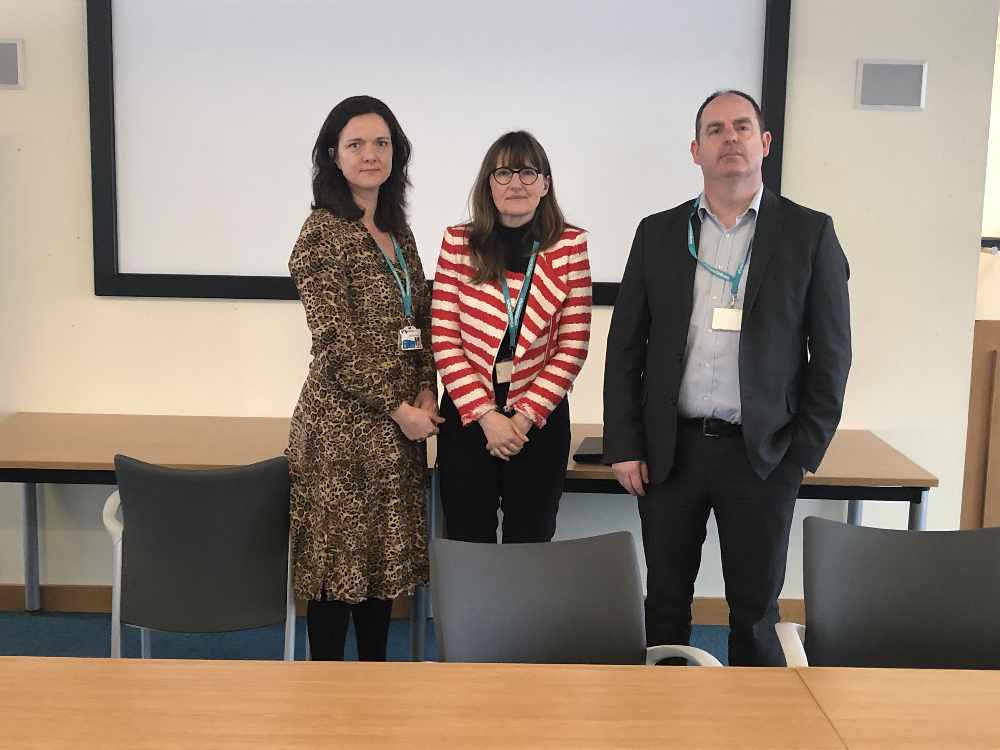 Fewer recycling collections, libraries closed, longer waits for funerals and extra body storage – these are the ways Oldham council is preparing to deal with the coronavirus pandemic.

Currently there are 1,950 cases of Covid-19 confirmed by Public Health England across the UK, with more than 50,000 tests carried out.

However Chief Scientific Officer Sir Patrick Vallance told the House of Commons health select committee that up to 55,000 people could already be infected.

As coronavirus spreads, councils are gearing up to play an important role in making sure people are protected.

In a Cobra style briefing, Oldham’s chief executive Carolyn Wilkins, along with chief clinical officer Dr John Patterson and strategic director of reform Rebekah Sutcliffe outlined how they are preparing to tackle the crisis.

A ‘strategic command’ has been established to deal with the impact of the virus that could see staff redeployed from different departments to support core services.

Major pillars of the town hall, such as bin collections, care services, children’s social care and homelessness services are all to be put under extra strain.

Carolyn Wilkins said that they are also planning for an upswing in the number of deaths, and are looking at increased ‘body storage’ in coming weeks.

There are currently ten cases of coronavirus confirmed in the borough, but this number is expected to rise when the latest figures are announced.

Coronavirus is anticipated to have a massive effect on care for the elderly and vulnerable, who are deemed most at risk of becoming seriously ill and requiring hospital treatment.

Carers could have to be tested before working in nursing homes, and nationwide school closures could also mean that carers with children have to stay home.

Children’s homes and social care will also be affected.

Ms Wilkins explained they are predicting staff shortages as the number of people having to self-isolate increases.

“We probably won’t have the same number of staff because the staff is going to fluctuate throughout this period,” she said.

“I think it’s helpful that we’re going back to the testing to give us that greater degree of certainty.

“We might have to get there in terms of the other Greater Manchester authorities in terms of mutual aid, but I suspect in areas like adult social care and homes we are all going to be in a similar position.

“The safeguarding responsibilities stand regardless of capacity.

“We can’t say there will be no changes or no impact but our business continuity processes are live and working really well.

“A lot of care is privately provided so we’re looking at what support can we give to care homes or individual domiciliary care facilities.”

Ms Wilkins added that on a national level the government is looking at providing personal protective equipment, such as face masks, within social care which would be coordinated on a regional level.

Local authorities are looking at making tough decisions to close public buildings, such as museums, libraries and community centres to tackle the spread of the virus.

Ms Wilkins say they are ‘considering’ the closure of libraries in Oldham but have concerns about social isolation for people who use the service.

“None of these are easy decisions and we’ve been reluctant to take that in isolation so that’s part of what we’re looking at across Greater Manchester,” she said.

“The library has a home delivery service, so we have a degree of that but that’s a bit like saying supermarkets do home deliveries, but you can’t get a slot now.

“We do online as well so while recognising it’s not for everybody, it’s how we encourage the promotion of that digital offer and what you can already do online. You can already download a book through the library.”

Ms Sutcliffe added: “If we did decide that some or all libraries had to be shut for a period of time there might be staff within those environments who can work elsewhere in order to maintain essential services.”

A staple of the council’s normal services, the impact of staff shortages may also see bin collections disrupted in the borough.

While efforts are being made to ensure key waste collections such as food waste go ahead, non-perishable recycling may take longer to be collected.

Ms Wilkins said: “Whereas things like paper is not as essential so if we get to that position then business continuity decisions will have to take place.

“It will be based on the number of people on crews and the number of vehicles you can support so they will be working that through.

“Some services will close because you don’t want people gathering collectively, others will be under pressure because of workforce issues.”

Ms Sutcliffe added: “But the impact of what is our absence rate as a result of self isolation, that is yet uncertain and as yet to unfold. None of us can be sure what that will look like for our services.

“Our priority is the protection of essential services and how do we flex our workforce in order to work across those boundaries.”

Local authorities and coroners are also preparing to deal with funerals and body storage, as the number of deaths is predicted to rise sharply to around 20,000 in the UK as the epidemic peaks.

Ms Wilkins said: “Part of the planning is modelling above average levels of death.

“In terms of the registrars service, in terms of registering a death and funerals, clearly if there are limitations about the number of people that can attend events that will impact on things like funerals not just weddings.

“And the other part of that is body storage as well. Everybody has to look at that capacity.”

In coming weeks there could be bigger delays between a person’s death and their funeral, she added, which could impact various religious and cultural groups.

“We’re working with the system in terms of funeral directors but trying to be as culturally sensitive to that as we can be, where there are traditions of 24 hours [between death and burial], Ms Wilkins said.

“We haven’t experienced anything like that yet, but it might be also that some of those cultural expectations can’t be met.”

There are widespread concerns about how coronavirus is set to affect homeless people, and how shelters can support rough sleepers to self isolate.

Oldham, like the other ten boroughs in the region, now has a number of beds available for rough sleepers through the A Bed Every Night scheme set up by Andy Burnham.

Ms Wilkins said that people struggling with homeless or who sleep rough are being recognised as a vulnerable group who are susceptible to the virus.

“60pc of rough sleepers have a respiratory illness anyway or existing conditions and it’s quite challenging for the current facilities, quite a lot of it is dormitory provision and maintaining that self isolation in a challenging group,” she said.

Ms Sutcliffe added: “We have got and are building capacity so that if people who are homeless need to self isolate that they are able to do that.”

As over 70s, and vulnerable groups more at risk from coronavirus are being told to limit social interaction, bosses are acutely aware of the knock-on effect on mental health.

There is now a focus in Oldham of recruiting younger volunteers to bolster community groups and charities, many of which have a core base of older supporters who now may have to stay at home.

Ms Sutcliffe said:  “We’re working really closely with Action Together to work through what is the impact in terms of volunteering.

“If people are having to self isolate we already know about the impact of loneliness which can be really detrimental to people so what other creative ways can we think about.”

Dr Patterson added: “It’s a very under-reported story but we can see there is a rise of suicides in the elderly age group in China because of the isolation.

“We know that the contagion rate of this disease is one person can pass it on to two and a half people.

“We need to think about two and a half people that we can personally take responsibility for and help.

Dr Patterson added that teaching older people how to use video calling and streaming services was now more important than ever, and would allow people in care homes not to feel cut off.

“So this is where families come together, where each family starts to ‘up-skill’ a generation,” he said.

“The technology now is not as scary as it used to be and it is so intuitive and simple so this is the time now.”

They are also looking at emergency food provision in the borough, and how can food be transported on a grassroots level in communities.

Bosses came out overwhelmingly against stockpiling as residents reported huge queues at supermarkets and shortages of goods like pasta and toilet roll.

Dr Patterson said: “When it comes to food and the normal bread and butter rations that people need, the message is very clear from central government and we would reinforce that – there is enough if everyone takes what they need for this week

“I would be mournful if I thought the plan was for someone who was 72 in Oldham that they were surrounded by a month’s worth of food and then not open their door to anyone and everyone for a month.”

Ms Sutcliffe added they would advise people not to panic buy.

“Draw upon the resources of the community, draw upon your family your friends and neighbours to do that shopping for you where possible,” she said.

“Of course there will be some people who are in those at risk categories who will on occasion need to go out and buy milk and bread and I think there is a pragmatism about that but panic buying is not helpful.”

Aside from core services, coronavirus is also to disrupt the democratic business of the council which sees councillors meet and discuss policies in public.

A meeting of Oldham’s full council on Wednesday night has been cancelled, although public questions will be answered on the council’s website.

Ms Wilkins said that legislation is being brought forward that could allow councillors to meet virtually, which may allow future meetings to go ahead.

The local elections in May have also been cancelled, and postponed until 2021.

Council leader Sean Fielding said: “The postponement for a whole year was surprising but we do support the decision given the need to reduce the spread of coronavirus and the advice received from medical professionals.

“We have stepped down our campaigning and will be working, as the administration at the council, with staff, partners and residents to keep vital public services running in Oldham during this period and safeguard our elderly and vulnerable residents.”

Ms Wilkins said the pandemic is also set to hit council finances in a ‘myriad of ways’, including less car parking income, less council tax and through its leisure services, and wedding venues.