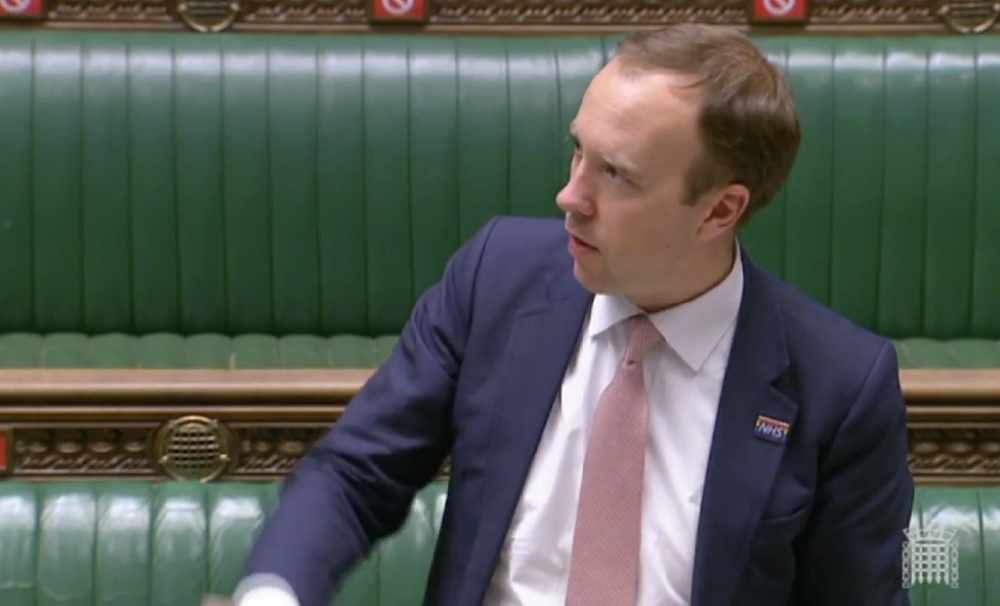 No decision has yet been made as to whether Greater Manchester will be placed under the severest coronavirus restrictions.

A meeting took place between the government and Greater Manchester leaders on Thursday morning (15 October) following reports that the region was heading for Tier 3 restrictions and the 'very high' Covid alert under the system introduced this week.

Amid conflicting reports, it's understood that no agreement was reached and that no extra financial support was offered by the government.

Health Secretary Matt Hancock (pictured) said in a coronavirus update in the House of Commons at around 11.30am that "no further decisions have yet been made" on places currently under Tier 2 where Tier 3 had been proposed but discussions are "ongoing" and "rapid progress" has to be made.

It's understood that further meetings will take place on Thursday afternoon regarding the position of Greater Manchester - which includes Tameside and Oldham - as the situation remains chaotic and confusing.

Mayor Andy Burnham told a press conference on Wednesday that he would consider 'legal action' if a Tier 3 lockdown was 'imposed' on Greater Manchester, without a promise to pay more than two thirds of furloughed workers' salaries.

MPs have said there was unanimous anger on Thursday morning's call about the evidence for the proposals and economic support.

Stalybridge and Hyde MP Jonathan Reynolds tweeted after the meeting had concluded to say what the government had offered.

Tier 3 - widespread destitution for an unspecified period of time

The Covid-19 meeting with Government is over and it was absolutely pointless. No consultation, no evidence was shared on the likely impact of further measures, no economic analysis and no enhanced financial support

Wouldn’t even tell us if GM is being placed in T3 lockdown!

His sentiments were also echoed by Denton MP Andrew Gwynne:

Well the Greater Manchester MP COVID briefing with Ministers was utterly pointless. While they claim “no decision on Tier 3” we know it was being heavily briefed. The strength of feeling was strong from Tory and Labour MPs alike. The Minister needs to listen: we are a city united https://t.co/SdADdcHcZI

Health Secretary Matt Hancock did announce that London, Essex, Embridge, Barrow-in-Furness, North East Derbyshire, Erewash, Chesterfield and York will move into the Tier 2 of restrictions from 12.01am on Saturday.