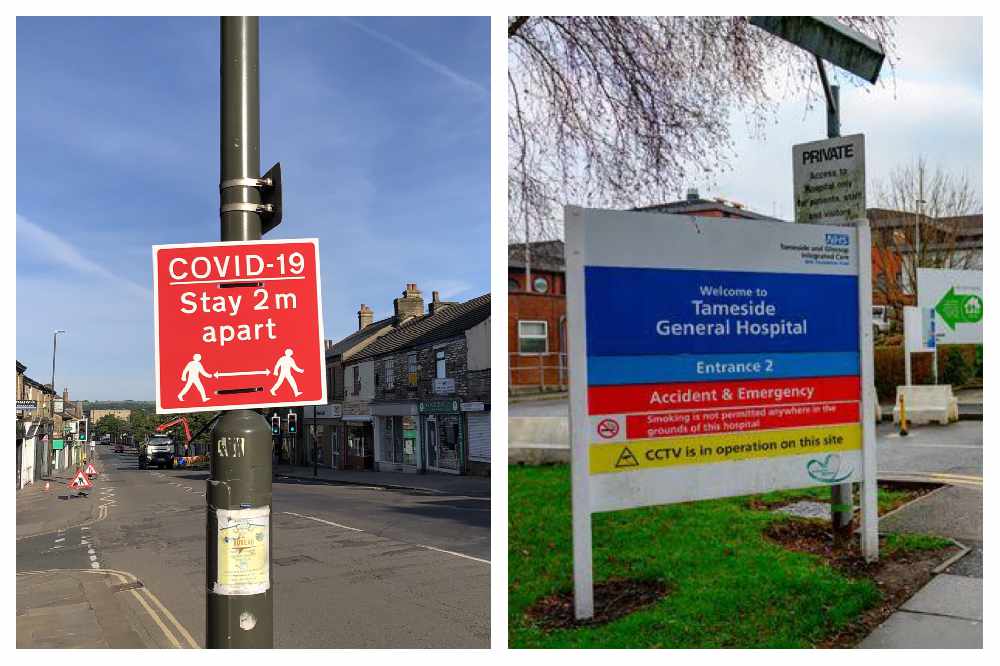 Covid-19 cases around Glossop and the High Peak have been linked to an outbreak in Tameside General Hospital.

However, the High Peak's higher number of cases per 100,000 people (55) remains low and is far lower than hotspots with reintroduced restrictions, such as neighbouring Tameside (153).

Dean Wallace, director of public health for Derbyshire County Council, told the Local Democracy Reporting Service that the High Peak is an area of concern.

He stressed that there was still time for residents to turn the situation around and avoid local lockdown but this must happen fast and social distancing, face mask and hand hygiene measures need to be consistently followed.

Mr Wallace said that the recent outbreak in Covid-19 cases at Tameside General Hospital, which saw 18 Covid-19 related deaths in the week to September 10, was connected to a number of Glossop patients.

He said announcements from the government’s chief scientific and medical officers were a “timely and stark reminder that we are in the midst of a pandemic”.

Mr Wallace said he was concerned that residents were “getting fatigued with the rules” and that “if we don’t stop some of this now we are in for a really bad winter”.

He told the LDRS: “Derbyshire county is following the national pattern, is on the same trajectory as the national picture but with a slower rate of infection. Derbyshire is big, if you divide it down into its districts you see a lot of variation.

“High Peak is trending higher and above the national average, whereas the Derbyshire Dales is lower.

“We are concerned about the High Peak and specifically the area around Glossop area. There are a sporadic number of cases there that are not easily linked together.

“It could be community spread and could be linked to travel. We are also seeing cases in the Buxton area increase in rates.

“We are aware that some of the cases around Glossop have been linked to the outbreak at Tameside Hospital, but even that does not explain the overall difference in the rate and points to the Greater Manchester position. The High Peak position points to Manchester as opposed to the rest of Derbyshire.

“In the past few days we have seen the High Peak position improve slightly but it is still out of kilter with the rest of the county.”

Glossop is the now the area of the county which has had the most confirmed cases of Covid-19 since the start of the pandemic – 89.

In the week September 11-18 there were 23 new Covid-19 cases in Glossopdale, along with a similar spike in the Heanor area (20 cases) which has seen the rate in Amber Valley surge from one of the lowest for much of the pandemic, to the second highest (48 cases per 100,000 people).

A number of Covid-19 cases were linked to several Heanor schools leading to potentially-affected pupils being sent home.

Meanwhile the head teacher of Glossopdale School introduced a mandatory face mask policy for all communal areas, apart from classrooms.

Mr Wallace said the High Peak could still avoid local lockdown and would not be drawn on whether this was inevitable if case numbers continued to increase.

He said: “If over the next few weeks people follow the guidance and we can trace the contacts, we can stop local restrictions from happening, because we did it before.

“Local people, boots on the ground, posting leaflets and talking to people, people calling from local phone numbers and email addresses makes a world of difference.

“Keeping in touch with people and getting soft intelligence and helping people struggling to self-isolate get their prescription are things which have helped areas such as Leicester, we have learned that from their lockdown.

“We are trying to do as much of that work as we are able to avoid becoming an area of national interest.

“There are additional powers that we can use and we will use them if we have to use them, just like with the vegan festival (in Riddings, Amber Valley, which the council used new coronavirus laws to ban).

“If what we have at the moment continues and it continues to be community transmission then we would be looking at reducing contact between households and if it was certain workplaces we would restrict those.

“There is no discernible pattern at the moment and I wouldn’t want to crystal ball gaze too much at this point. Hopefully we can stave it off again.

“It would be at the behest of national government really, we would lose local control and if the transmission is in the community it may see a ban on households meeting. It is much better that we work together to avoid that and more serious measures being brought in in later weeks.

“People say the cases aren’t translating into hospital admissions but those typically track three to four weeks behind, so the hospital beds we are seeing filled now will have had the disease three or four weeks before.

“Those admissions are already happening and in two, three or four weeks time we will see those step up. If left unchecked those numbers will become bigger and bigger.

“As the virus moves around we will see more hospital admissions. We saw a number of patients at Tameside General Hospital had been identified as Glossopdale residents and in the High Peak who had been tested by the hospital.”

The rate of Covid-19 cases per 100,000 for the week September 18-24 by district, borough and the city are listed below, with the national average and key hotspot areas for context.

There have been 824 confirmed cases of Covid-19 in Derbyshire (including Derby) in the first three weeks of September.