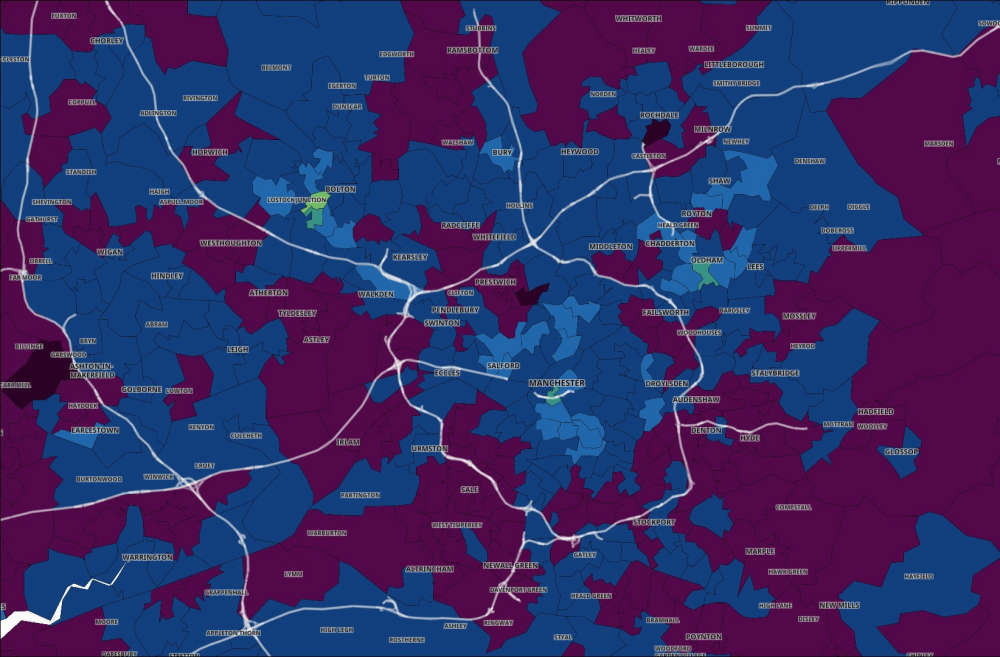 Covid-19 cases in the week to November 2 in Greater Manchester. Photo: Gov.UK.

The region's worst hit Covid-19 hotspot is a neighbourhood in Rochdale, the latest figures have revealed.

Trafford, the borough that has consistently topped the table for the highest overall infection rates, now no longer features any areas in the top ten affected localities.

Instead it is dominated by parts of Rochdale, Bury, Tameside and Wigan.

Meanwhile neighbourhoods in Bolton, Manchester, Oldham, Salford and Tameside are recording the lowest rates in the region.

Five areas saw cases in single figures in the week to November 2.

The region’s Covid-19 hotspots and ‘notspots’ have been identified through an interactive map which charts the number of positive test results in each neighbourhood across the country using government data.

Top for the week to November 2 is Deeplish in Rochdale, where there were 88 new incidences of the virus – 51 more than the previous week, a 137pc increase.

In second place is Sedgley Park in Bury where the infection rate is 826, with 80 people testing positive for coronavirus.

It is followed by another Bury neighbourhood Whitefield West and Park Lane, which recorded 55 cases of Covid-19.

Summerseat, a Bury neighbourhood that has previously appeared on the top ten hotspots, is in fifth place with a rate of 749.5.

It saw 43 new cases, no change from the previous week.

Nearby Ramsbottom is next with a rate of 715.4 and 63 people testing positive for Covid-19.

In seventh place is Hooley Bridge and Norden West in Rochdale which recorded 43 new cases and a rate of 697.8.

Next is Littleborough North and Calderbook in Rochdale which in the week to November 2 had a rate of 679.4.

It recorded 44 new cases, an increase of 14 from the previous seven days.

Finally Wigan Central is in tenth place with 53 new cases and a local infection rate of 675.2.

At the other end of the scale, Rumworth North in Bolton has the region’s lowest rate, standing at 45.4 with just four cases recorded.

In second place is neighbouring Rumworth South with six cases – down by 12 from the previous week – and a rate of 71.4.

The University North and Whitworth Street area of Manchester follows with eight new cases and a rate of 72.1.

Another Oldham town centre area, Alexandra Park recorded 13 new cases of the virus and a local rate of 106.7.

Busk in Oldham is next with 11 incidences of Covid-19, which results in an infection rate of 117.

In seventh place is Langworthy Buile Hill in Salford where the rate was 145.7 with ten new cases recorded.

Another Bolton neighbourhood, Lostock and Ladybridge, also appears in the ‘notspots’ list with 11 new cases and a rate of 149.9.

Lastly is Chadderton North in Oldham where the rate was 150, and 11 people had tested positive for Covid-19.