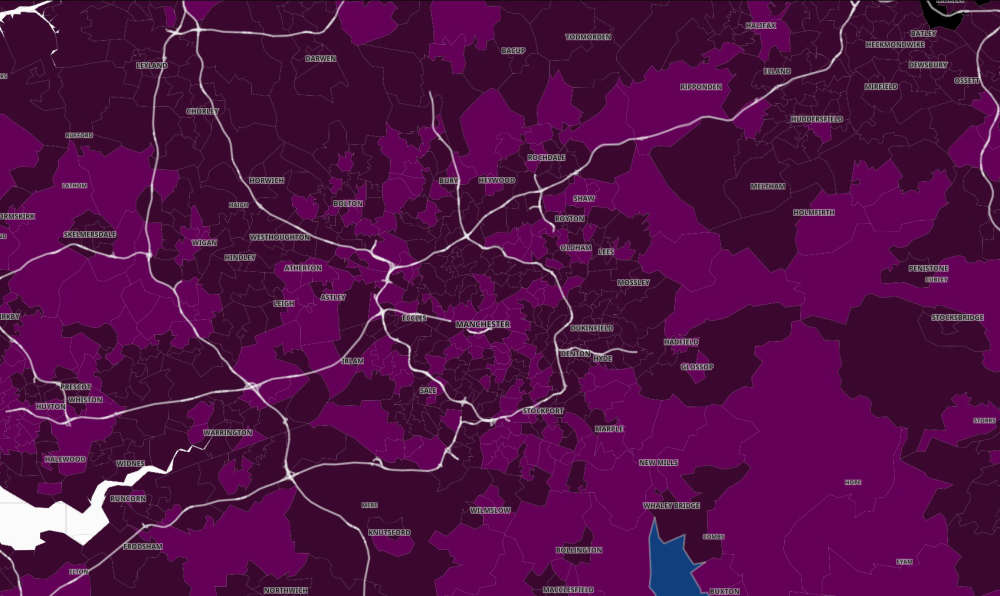 Covid-19 infection rates in Greater Manchester in the week to 18 January 2022. Photo: Gov.UK.

Coronavirus infections have fallen in hundreds of neighbourhoods across Greater Manchester, while there are just five local areas in the entire region where cases of Covid-19 rose in the last week.

A total of 24,996 people tested positive for coronavirus across Greater Manchester in the week which ended on January 18.

The infection rate in the region is lower than the national average, which is 973.6 cases per 100,000 people.

The region’s weekly total has decreased by 16,508 cases compared to the previous week, which means the infection rate was down 40 per cent in the last week.

From January 27 the government has agreed to lift a large portion of Plan B rules in England which have been in place since December.

Speaking to the commons ahead of the announcement, Health Secretary Sajid Javid said he was “cautiously optimistic that we will be able to substantially reduce restrictions next week.”

This includes scrapping the mandatory wearing of masks in classrooms and in indoor public spaces, although the Prime Minister has urged people to still ‘think about’ wearing a mask when in public environments.

According to the latest local data, the top ten local infection hotspots for the virus are spread across Salford, Tameside, Bury, Trafford, Rochdale and Manchester.

However each area is seeing much lower infection rates than in the first weeks after the Christmas period where they exceeded more than 3,000 per 100,000 residents.

In the week to January 18 the latest hyperlocal data shows the biggest hotspot was Barton upon Irwell in Salford.

The Bury neighbourhood of Prestwich Central follows with a rate of 1,460.3, and 94 cases of Covid-19 being recorded.

Next is Wardleworth and Newbold Brow in Rochdale, where the 139 weekly cases led to a rate of 1,376.8.

Ashton East in Tameside is in sixth place with 97 new cases of Covid-19, totalling an infection rate of 1,348.5.

West Timperley in Trafford had a rate of 1,302.6 in the week to January 18, with 114 people testing positive for coronavirus.

In eighth place is the Manchester neighbourhood of Clayton Vale, where 106 cases of the virus were recorded.

Finally Prestwich East, in Bury, is in tenth place with 99 cases and a local infection rate of 1,291.6.

At the other end of the scale, the Stockport neighbourhood of High Lane has the lowest infection rate in the region, standing at just 436.3 with 25 new cases.

It is followed by University North and Whitworth Street in Manchester with 49 cases and a rate of 441.6.

In third place is the Trafford neighbourhood of Bowdon, where 39 people tested positive in the week to January 18.

In fifth place is Romiley and Compstall, also in Stockport.

The 41 cases recorded there convert to an infection rate of 531.2.

Piccadilly and Ancoats in Manchester follows with a rate of 532.6 and 105 new cases of Covid-19.

This was a drop of 87 cases from the previous week.

Fallowfield Central, also in Oldham, is in seventh place with a local rate of 548.4, and 65 cases recorded in the week to January 18.

Heald Green East in Stockport also makes it into the top ten areas with the lowest infection rates with a rate of 550.7 and 39 new cases.

Hazel Grove East and South, also in Stockport is in ninth place with 33 incidences of the virus, resulting in an infection rate of 562.4.

Finally Wood End in Oldham is in tenth place with a rate of 577.3 from 34 new cases.