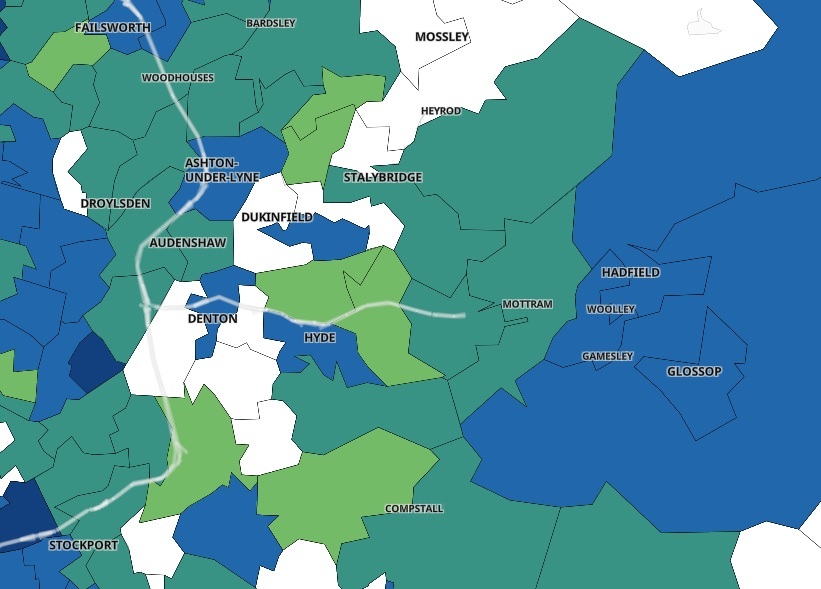 Cases of Covid-19 are climbing in Tameside as the new Delta variant spreads across the north, but eight areas are still managing to suppress the virus.

The latest local data shows that incidences of coronavirus have risen in 19 neighbourhoods in the borough.

However there are still nine areas of the borough that have recorded fewer than three cases of Covid-19, meaning that the virus could have been completely suppressed.

These include three areas of Denton, and two Dukinfield neighbourhoods.

In the week to May 29, according to the government heat map for cases, the three main hotspots were Ashton Central with 13, Hyde South with 12 and Newtonmoor with ten.

Ashton Central also saw the biggest increase in cases, up by ten from the previous seven day period – a 333 percentage increase.

Newtonmoor saw the second biggest rise in cases, which increased by eight, a 400pc hike.

Chiefs are warning residents to be vigilant, after the infection rate for the borough more than doubled in a week.

This climbing rates are believed to be driven by the spread of the Delta variant, the variant first identified in India, which is much more transmissible.

It has caused a huge spike in cases in Bolton, and other northern areas such as Blackburn and Darwen and Kirklees.

Despite the risks, officers in Tameside have noticed an increase in people not wearing face coverings and have been handing out masks at businesses, and at transport hubs.

Tameside council leader Brenda Warrington said: “There may be a mood of people starting to feel safer and relax but the reality of the situation and the risk we each are facing is quite the opposite – rates across Greater Manchester are quickly climbing and so the chances of catching Covid, or at the very least becoming a close contact and having to self isolate, are going up.

“I urge people to keep up their good work in following safety measures and do what they can to minimise mixing and contacts.

“Socialise responsibly outdoors, work from home where you can, keep getting tested and take up your opportunity for first and second vaccinations when invited.

“I can’t emphasise the point of getting vaccinated, when invited, enough.

“We are seeing new Covid cases drop in vaccinated age ranges and we know that having both vaccinations gives you much better protection from the Covid variants, which are becoming dominant.

“However it is important that everyone, whether vaccinated or not, gets regularly tested and sticks to safety measures to help protect themselves and everyone they come into contact with, including their loved ones.”

But a meeting of Tameside’s primary care committee was told this week that vaccine capacity remains limited by the supply chain.

Tori O’Hare, head of primary care, said: “The numbers are high and our teams continue to work really hard.

“We’re above 75pc (vaccine uptake), that national target that was set in all cohorts one to ten, but we’re actually close to 90pc and above on all but two of those.

“It’s the younger age groups that we’ve gone with more recently that are lower but they exceed that national target.”

She added there were plans for vaccination pop-ups in and around the Ashton Market square area, in central Hyde and Hattersley in the coming days.