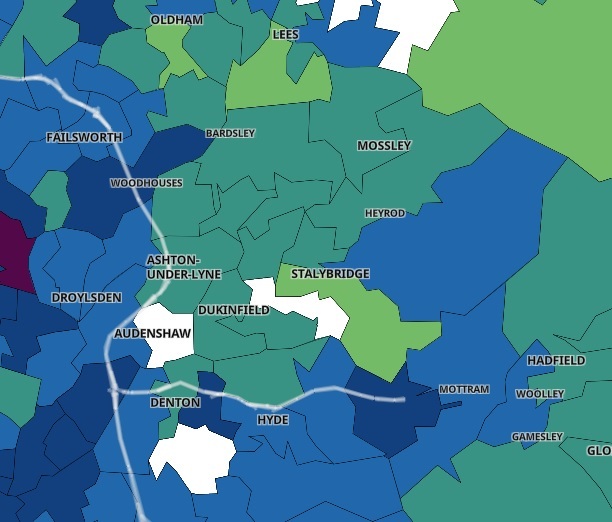 Cases of Covid-19 are rising in Tameside as the Delta variant becomes 'dominant' – and the council is handing out more face masks to get residents to protect themselves.

While the borough has the lowest infection rate in Greater Manchester, it is more than double the average for England.

Council leader Brenda Warrington told the Local Democracy Reporting Service that, reflecting the trend across the region, the more infectious Delta variant was now dominant in the borough.

And the ‘bulk’ of new cases are occurring among younger residents, including teenagers.

However there are still three areas, Denton South, Dukinfield East and Hough Hill, and Guide Bridge where cases of Covid-19 are below three, meaning they could have been suppressed.

The two biggest hotspots for the last seven days have been Hyde South and Dane Bank, which both saw 16 cases.

In the case of Dane Bank, this was an increase of nine from the previous week.

Hattersley recorded 14 cases – a rise of nine – while Denton East and Audenshaw both saw 13 incidences of the virus.

Councillor Warrington said: “We know that the Delta variant is now the dominant Covid variant nationally and particularly across the North West and Greater Manchester, including in Tameside.

“Similar to other areas across Greater Manchester, the bulk of new cases in Tameside are among younger residents which includes teenagers and younger working age adults.

“Throughout the pandemic, Tameside has seen widespread transmission across the borough, with relatively few spikes in case rates in particular geographies.

“There are not any current persistent ‘hotspots’ with higher rates, however we continue to monitor this closely on a daily basis.

“We are also closely monitoring vaccination uptake across the borough with enhanced activity in any areas where uptake is lower, though the borough-wide uptake of vaccinations continues to be strong as much as supplies allow.”

However Coun Warrington added that the council’s compliance have noticed ‘more cases’ of people not wearing face coverings.

“Our teams have been handing out masks at transport hubs and businesses to help highlight the message that people still need to wear them to protect themselves and others,” she said.

On whether Tameside supports sticking to the timetable of relaxing all restrictions on June 21, Coun Warrington said: “We expect the rest of the country to experience a rise in rates as this next wave of COVID increases – as such, we would look to a national approach.”