You Haven’t Had the Pleasure of Me Yet, Have You? 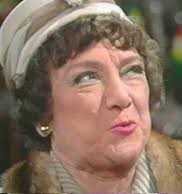 Commons. Nothing new in that I hear you say. On this occasion he paraphrased a line made famous by TV character Nellie Pledge in the 70’s pickling sitcom, Nearest & Dearest. Channelling his inner Hylda Baker, the Prime Minister referred to the opposition leader as, ‘you great big girl’s blouse’. An insult to women and indeed men who enjoy the freedom of a loose, free flowing, ladies’ garment.

The head of the UK government is a scholar of the ITV classic comedy. He’s dropped the B bomb before when describing political opponents such as Gordon Brown and is renowned for using Nellie Pledge malapropisms when the cabinet sits together. He is known to open meetings with "I can say that without fear of contraception…’ and frequently points at Michael Gove, who is unable to control his bladder, asking colleagues, ‘Has he been?’ When Jacob Rees-Mogg plays the high-powered business executive in meetings, as Nellie Pledge’s brother Eli frequently tried to do in the TV show, the Prime Minister asks him who he thinks he is "sat sitting there like a big business typhoon!

On the other side of the chamber, Her Majesty’s most loyal opposition has struggled to find their own wholly inappropriate 1970s TV catchphrases. So far, the leader of the opposition has shouted across the floor, ‘I’ve started so I’ll finish’, ’They don’t like it up em’ and ‘Look at the muck in ere’. Opposition MP’s are now reverting to the lightning quick and extremely difficult 3-2-1 hand gesture made by Ted Rogers in the TV show of the same name, safe in the knowledge that when performed incorrectly it results in a rude hand gesture.

For more of the same and lots of great music from the decade where everything was brown, orange and avocado, join Steve Stubbs on Tameside Radio for the 1970’s show Monday to Friday at 7pm.