Of a weekend I know many of you still like to shake your groove thing and point that disco finger to the sky. It might have been alright in the 1970s but nowadays this type of activity must be carried out in the privacy of your own home with the curtains closed, so not to frighten children playing in the street. 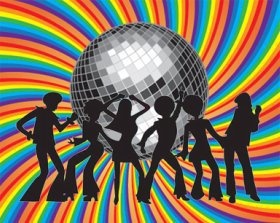 So many iconic dances came and went in the 1970s. Some were iconic for all the wrong reasons. One of the early dance crazes of the decade was The Hustle. It wasn't fraudulent in any way and consisted of four simple moves: stepping, turning, chicken dance (live chickens not essential) and twirling. Twirling had of course witnessed a resurgence in the 1970s thanks to Bruce Forsyth regularly inviting co-host Anthea Redfearn on the TV show The Generation Game to, ‘Give us a twirl’.

Then there was the Bus Stop. It involved a lot of standing around near a metal or concrete pole waiting for something to happen before thrusting out one arm when the music started. Car Wash was born out of the smash disco hit of the same name by US group Rose Royce but dancers soon grew tired of being lathered in soap, hosed down with cold water and pushed through a drying machine.

The Punk movement had its own, well, movement. The Pogo. It comprised jumping off the ground, keeping the body stiff, arms rigid, and legs close together. The more adventurous combined The Pogo with St Cecilia’s anarchic 1971 anthem that invited us all to leap up and down and wave our knickers in the air. I'm still not sure to this day whether it's mine or someone’s else’s underpants that I should be waving in the air. Note of caution: - watch out for low ceilings when performing The Pogo.

The coming together of hips, bottoms, bellies or indeed any other body parts was the raison d'être of The Bump, a rare two person dance. Over exuberance often led to your partner being bumped across the dance floor so if bumping at home please remove any breakables to another room and always wear a crash helmet.

Two garden maintenance inspired 70s dances were created specifically to help the public better understand the operation of outdoor machinery. The Lawnmower was for people lucky enough to have a grassy knoll big enough for a petrol mower. First start up the imaginary engine by pulling the imaginary chord, grab the imaginary handles and wobble forward like a Weeble as you mow the imaginary lawn. The Sprinkler simulated movement of a garden sprinkler without water. One hand is placed on the back of the neck and the other straight out in front. The arm is then moved back and forth in a staccato fashion while spinning in a circle and making yourself sick. The last part is optional.

Footnote: - Any attempts at 70s dancing should filmed and posted online immediately. These people must be named and shamed.